Since 1994, more than 50 per cent of the companies in the Global 500 have faced serious threats to their core business models. About half of that group have gone bankrupt or been acquired. The rest have had to make risky and fundamental changes in strategy.

Confronting the need to redefine their core, many management teams find themselves tempted by big-bang solutions: dramatic, transformative mergers or aggressive leaps into sexy new markets. But seemingly bold moves like these rarely pay off. The success rate for big, life-changing mergers is only about one in 10. It is less than one in seven for moves into a hot, new market far from a company's core.

For most companies, a better answer usually lies close to home, concealed from view. Our research shows that nine out of every 10 companies that successfully renewed themselves found the solution by mining their hidden assets—assets they already possessed but had failed to tap for maximum growth potential.

The classic example is Apple. The iPod drew on the company's well-known skills in software, user-friendly product design and imaginative marketing—its underexploited capabilities. Samsung focused on a different set of hidden assets: underinvested business lines. It shut down or sold 76 businesses, thereby freeing up resources for investment in its lagging but promising semiconductor and consumer electronics businesses, which today are world-leading.

Should not well-run companies already be using all their valuable assets? Actually, large, complex organisations always acquire more capabilities or businesses than they can focus on at any one time. Once those assets have been neglected for a while, a company's leaders often continue to ignore them or discount their value. But when a company needs to redefine its core, secondary businesses and capabilities of the past can suddenly assume centre stage, and become the key to the next-generation growth engine.

One way to open management's eyes to hidden assets is to identify the richest hunting grounds. Our three-year study suggests that the most valuable ones are camouflaged as hidden business platforms, untapped customer insights, and underused capabilities.

Turning an overlooked business platform into a new core is more common than you might imagine. Think of how General Electric revitalised GE Capital, a division that has now fuelled its parent's growth and profitability for years. More recently, Nestlé discovered that it had a number of food and drink products designed to be consumed outside the home. Assembling those products into a new unit, Nestlé Food Services, it created the core of a new multi-billion-dollar business.

Untapped customer insight is another hidden asset. Harman International, a maker of high-end audio equipment, faced stagnating growth in its consumer and professional markets. But co-founder Sidney Harman considered that customers who bought expensive audio systems at home were spending more time in their cars. Along the way, Harman also purchased the German company Becker (which sold radios to Mercedes-Benz), allowing it to draw on Becker's digital audio capabilities, and to develop the high-end automotive "infotainment" systems that fuelled the company's renewal. Thanks largely to its success in this customer segment, Harman's market value increased 40-fold from 1993 to 2005.

Hidden business platforms and hidden customer insights are assets that companies already possess; in theory, management just has to uncover them and put them to work. Capabilities—the ability to perform specific tasks over and over again—are different. To fuel new growth, an underexploited capability usually needs to be combined with other assets to produce something distinctly new and better.

The Danish company Novozymes, for example, had long made low-tech commodity enzymes used in detergents. But when Novozymes was spun off from its parent in 2000, Chief Executive Steen Riisgaard focused his research capabilities on developing the company's skills in producing specialty bioengineered enzymes. That led to its next "repeatable" growth formula. Today, the company is a leader in producing enzymes that extract alternative biofuels from plants.

Chris Zook and James Allen are co-directors of the Global Strategy practice at Bain & Company in Amsterdam and London respectively. Mr Zook is author of Unstoppable: Finding Hidden Assets to Renew the Core and Fuel Profitable Growth. 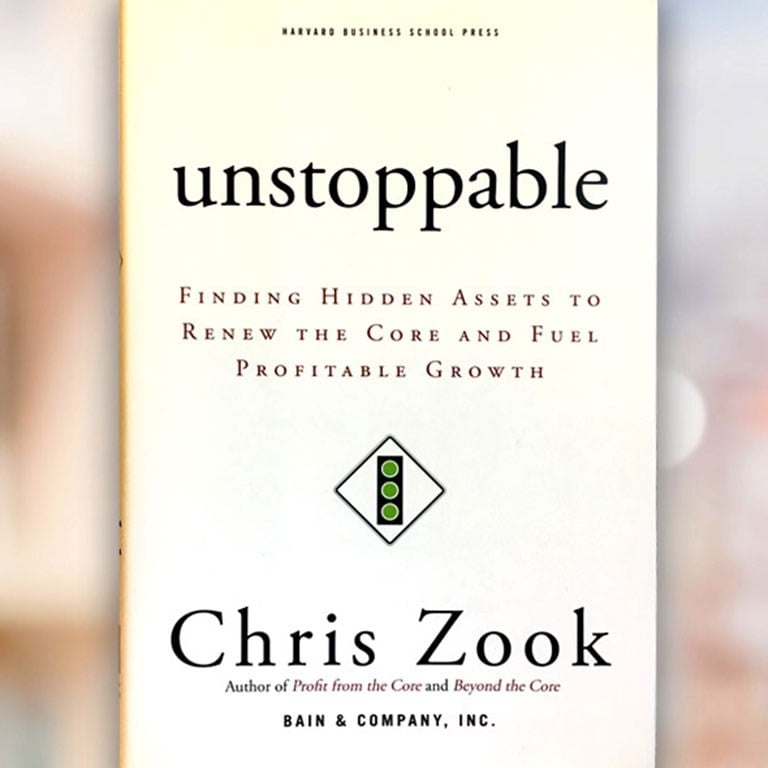