Here's a way of thinking that can help you make smarter organizational investments: Decisions determine performance. As discussed in a previous post, companies that make better decisions, make them faster, and execute them more effectively typically outstrip competitors. Bain research demonstrates this connection, and experience with clients bears it out.

A company's decision capabilities ultimately depend on its organization. Every organizational element—people, processes, incentives, culture, and so on—has to reinforce good decision making and execution.

If you accept these premises, you have a powerful tool for assessing the millions of dollars you're probably spending on organizational initiatives. If the initiatives boost decision effectiveness, chances are they're worth the investment. If they don't, they're not.

There are ten questions that illustrate the differences between the new approach and the old way of thinking about organizational change. This post will cover the first five; the next post will take up the rest.

Companies traditionally ask, "Do we have a clear and compelling mission and vision?" Wrong question. What you really want to know is: Are we clear on the top three-to-five business priorities and on what they mean for decisions in every part of the organization?

Understanding the key priorities leads to good decisions. British American Tobacco (BAT), for example, once comprised four competing companies. Then new CEO Martin Broughton eliminated the internal competition and set out a goal of regaining the number one spot in its industry. Just a few priorities guided the decisions required to reach the goal. Broughton's focus on growth in premium global brands, for instance, allowed people to worry less about local value brands.

Companies usually want to get everyone on the same page, but they don't often succeed. They ask themselves: "Do we have effective internal communications?" when they should be asking: "Are we helping everyone in the organization understand our objectives and strategy so they have the context they need for good decisions?"

Some years ago, the power and automation company ABB mapped out a new set of strategic priorities and began transforming the organization to support those priorities. The executive team distributed a video explaining the core elements of the transformation. The CEO sent out weekly e-mails discussing the new ABB, including a feedback tool for employees to express any questions or concerns. Thanks to the focused communication, no one at ABB could miss the company's new direction.

Executives regularly ask themselves "Who reports to whom?" But conventional job descriptions and reporting lines often say little about who should play key roles in major decisions. The more important question is: What are the specific roles and accountabilities for our critical decisions? To answer it, many companies find it valuable to spell out roles with a decision-rights tool such as RAPID®.

The conventional question is whether a company's structure aligns with its strategy. The more effective question is: Does our structure support the decisions most critical to creating value?

Structure is rarely the chief culprit behind poor decision making and execution. But if a reorg is necessary, the key to success is aligning the structure with the business's most important decisions. UD Trucks, for instance—formerly Nissan Diesel—had launched a strategy focused on sales to large, nationwide operators and growth in profitable after-sales service. But key decisions about pricing and service levels for national accounts weren't integrated across the network. In response, UD Trucks consolidated its 10 regional sales companies into a single national sales group. The new group could make better decisions about how to pursue the customers that were critical to the strategy's success.

The usual question governing processes is: "Are our core business processes effective and efficient?" The decision-centered question is: "Are our processes geared to produce effective, timely decisions and action?"

Bringing decisions into the mix makes for more effective process reengineering. At the Internet company Yahoo!, every new product, such as a new version of the home page, moves through well-defined processes. But the company had originally designed those processes without specifying and coordinating the critical decisions each one entailed. So product development might consider a new product finished, even though the regions hadn't yet weighed in on the degree of flexibility needed to meet local user needs.

To remove the blockages, team members carefully defined where the new-product development process stopped and the marketing process began. That helped to ensure coordination of decisions and kept things from slipping through the cracks. Questions like these should help you improve decision effectiveness and get the most bang for your organizational buck. Another five questions are examined in the next post.

A company that attacks its organizational weak spots in these areas will find that its decision making and execution—hence its performance—improve significantly.

How to make change stick. 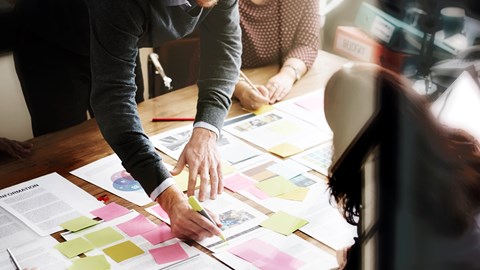