Diverging fortunes across industries is nothing new. For years, disruptive trends such as technological innovations or changing consumer preferences have upended existing business models in retail, media, consumer products, automotive, and payments, among other industries.

In 2020, we witnessed further separation, however, between winning industries and losing industries. Technology, media, and telecommunications, which rode strong growth tailwinds as a result of Covid-19, clearly outperformed, while energy companies suffered the most (see Figure 1).

The Covid-19 crisis had varying impacts across industry sectors

Most businesses have reacted. Almost 80% of the M&A practitioners we surveyed confirm that their companies have revised their short- and/or long-term corporate strategies, with M&A and divestitures playing a major role. Our survey respondents expect M&A to account for 45% of revenue growth over the next three years vs. 31% over the prior three years. More than 90% of respondents believe that the level of divestiture activity will increase or stay the same in their industries.

A few years ago, we identified an increase in the share of scope deals aimed at helping companies expand into fast-growing markets or gain new capabilities. This trend continued in 2020, with scope deals further increasing volume share to 56% of all large deals (more than $1 billion) compared with 41% in 2015. Not surprisingly, the picture varies by industry, with healthcare, technology, and consumer products standing out with the highest share of scope deals (see Figure 2).

The need for new critical capabilities was at the heart of many recent scope deals. For example, growing consumer demand for direct delivery was the impetus behind US retailer Target’s acquisition of delivery services business Deliv; Nestlé’s acquisition of healthy meals delivery company Freshly and Ahold Delhaize’s acquisition of a majority share in FreshDirect (with Centerbridge Partners taking 20%) are other examples of capability scope deals.

Scale M&A continues to be relevant as well, especially in industries that are watching the pandemic hasten the disruption of their business models. Traditional media and retail will experience more consolidation as scale becomes increasingly necessary to compete with and outinvest digital competitors. In banking and telecommunications, consolidation is also encouraged by regulator support. For example, in banking, the US and Europe are already witnessing the start of domestic consolidation, with deals such as PNC and BBVA in the US, Bankia and Caixa in Spain, and Intesa Sanpaolo and UBI in Italy.

Scope M&A will remain relevant across all sectors as companies refocus on growth and the new capabilities that are gaining in importance as disruption mounts. “New world” companies are scarce, though, and buying them typically is expensive, with deal multiples based on revenue instead of earnings before interest, taxes, depreciation, and amortization. Moreover, the acquirers, from “old world” industries, generally have little experience in the new world.

That is why more companies are weaning off the idea that outright acquisition is the only path to bring in new capabilities. They are open to forging alliances and partnerships as well as doing venture or minority investing so that they can share capabilities and minimize M&A risk.

Sometimes competing companies independently invest in a promising technology. Volkswagen and BMW both invested in Northvolt, Europe’s largest battery cell producer, as a way to secure battery supply in the coming years. Northvolt expects to start production at the end of 2023, and it will also supply other automotive original equipment manufacturers and industrial companies. The investments are partly inspired by a need to develop and share a common standard for electric vehicles and charging stations, but they are also to share the massive capital requirements of getting these new technologies into production.

Similarly, multiple partnerships were formed to develop vaccines for Covid-19. Partnerships between Pfizer and BioNTech, Sanofi and GlaxoSmithKline, and AstraZeneca and Oxford University enabled both capability sharing and an accelerated timeline to vaccine development.

Our survey of M&A practitioners found that the preferred alternatives to outright M&A differ by industry. For example, partnerships were prominently mentioned by respondents in the healthcare, technology, media, and telecom industries, while joint ventures (JVs) were more commonly cited in the energy and natural resources industries.

As companies expand into these alternatives to traditional M&A, they need to build M&A teams that are nimble and able to develop the skills for selecting and executing various deal types. By updating their traditional M&A playbooks for new types of investments or partnerships, companies can minimize the risks associated with bringing in new capabilities.

Another alternative to traditional M&A is corporate venture capital, which requires an entirely different set of talents and capabilities.

Technology and healthcare account for more than 60% of corporate venture capital deal value, but financial services, telecommunications, and advanced manufacturing and services are swiftly catching up (see Figure 3).

2020 was a record year for corporate venture capital investing

Four ways to de-risk deals in a volatile environment

In today’s world, the premium for growth and quality assets is higher than ever. Deal multiples have stayed the same or increased in sectors such as technology and healthcare. In addition, scope deals come with higher multiples (greater than 30%), but they offer lower assurance of cost synergies, which typically are easier to achieve than revenue synergies.

Companies can take many steps to de-risk deals in this economic environment. We’ll look at four of them.

First, they can get sharper at estimating, planning, and executing their way to generating near-term revenue synergies; they can also accelerate the target’s growth plan and enable faster capability transfer across the organizations. The successful approach to diligence and integration in scope deals is remarkably different from scale deals.

Also, dealmakers can hedge the downside potential by getting creative with earn-outs and other results-driven incentives. Almost 45% of our survey respondents expect the use of earn-outs to increase for carve-out transactions, enabling firms to defer payments and make them dependent on future business success.

Another de-risking approach is to start with a minority stake before plunging into full ownership. Minority stakes allow for greater flexibility, with opportunities to learn about each other, work together, and plan for joint growth. Flexibility comes with a lower level of control, however, so careful planning and meticulous governance are required to align the objectives of both parties and ensure joint decision making for all critical decisions.

Finally, savvy corporate acquirers continue to forge partnerships with financial investors. About 65% of our survey respondents expect to partner with private equity (PE) firms, and almost 80% of them say they would do it to share investment risks. Our conversations with PE firm partners, however, show that the mutual benefits go beyond financing. PE firms are now more open to taking minority stakes, especially as they see corporate partnerships as another source of finding future deals. With their significant diligence and transaction experience, PE firms also bring unique capabilities to corporate partners—namely, a stamp of quality to deal execution and a value creation focus, among others.

The Covid-19 crisis has reinforced our view that winners use M&A in downturns to widen the gap with competitors. They acquire new capabilities to reshape their business model to adapt to the changing business environment, and they divest to streamline their portfolios for better focus.

Given the scarcity and cost of fully acquiring companies with “new world” capabilities, companies are creatively expanding their options beyond traditional M&A. Some are cocreating future growth strategies with JV partners. Some are trying before buying with minority stakes. Some are using corporate venture capital to invest in future growth at early stages. Whichever path they choose, winners will continue to build new skills and reshape their businesses while minimizing M&A risks. 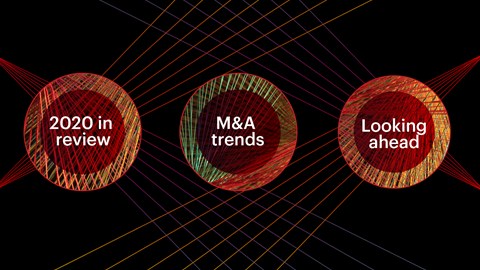