We talk to executives all the time, all over the world, and no matter how we start out, we always end up discussing change. Two years ago, in response to this rising chorus of questions, we began devising a system to help companies measure their capacity for change—their change power, as we called it.

Based on a survey of close to 2,000 employees at 40 large, global organizations in a cross-section of industries, we discovered that change power is a powerful predictor of performance. Companies that appear in the top quartile of the Change Power Index® are more profitable, with margins twice those of companies in the bottom quartile. Companies in the top half, grow revenue up to three times faster than companies in the same industry that rank in the bottom half. Each move into a higher decile on the index (from, say, the 50th to the 60th percentile) correlated with a margin improvement of 150 basis points and a climb in total shareholder return of more than 250 basis points. In addition, companies that appear in the top quartile of the index tend to have leaders and cultures that rate significantly higher than those in the bottom quartile, as well as employees who feel more inspired and engaged. These survey findings on leadership, culture, inspiration, and engagement were consistent with Glassdoor rankings for the same companies.

These findings convinced us of the value of measuring change power, and that doing so can help companies identify their strengths and weaknesses, understand how they compare to competitors, and use that knowledge to develop focused plans for getting better at change.

Every company will have its own balance of factors that affect its change power. But most fit a pattern that corresponds to one of four common archetypes: (1) In Search of Focus, (2) Stuck and Skeptical, (3) Aligned but Constrained, and (4) Struggling to Keep Up. Each archetype has its own symptoms and remedies. 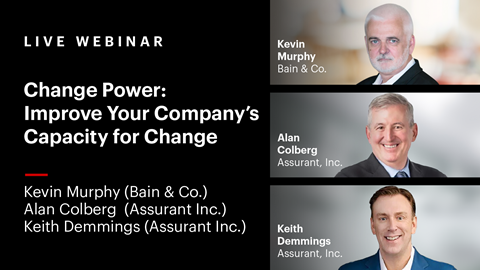 Change Power: How Assurant Improved Its Capacity for Change