The hunt for new growth is becoming an existential challenge. Bain & Company research suggests that about one in five big companies is likely to be suffering a stall-out in its main growth engine, meaning that over five years it has suffered declines of more than 25% in revenue and more than 50% in profit, shedding at least $10 billion of its own market capitalization. Such declines tend to result in corporate collapse or acquisition.

The outlook is hardly rosy at many of the companies that aren’t in this dire predicament. Measured over 10 years, only 1 in 13 businesses is a sustained value creator.

Amid this heightened uncertainty, some are managing to build new core businesses at scale with apparent ease. Take Disney’s foray into streaming, or Amazon’s relentless push into new markets such as cloud computing. Yet the reality is that it’s extremely hard to reach beyond your core to evolve. While some diversified companies reward their shareholders with consistent double-digit returns (see Figure 1), broad-based value creators are the exception. In fact, most companies fail to generate an overall return superior to their cost of capital over the long term.

It’s rare to create value day in, day out, but it is possible in a broad range of sectors

When responding to threats to their current growth engine, one of the key mistakes companies make is to pursue a strategy of unrelated diversification. Investors are quick to discount companies that seem to sprawl, even in regions accustomed to rewarding breadth. In emerging Asian economies, where conglomerates have set the pace for years, pure-play rivals are now posting higher total shareholder returns as competition matures.

In our experience, expansion beyond the core can be more coherent and less risky if executive teams take a systematic approach focused on what really differentiates their business from others. On one level, that requires paying close attention to business definition—through a deep understanding of customers, capabilities, and other factors that delineate the boundaries of each business, plus a keen sense of underlying connections between businesses.

Yet we’ve also found that companies able to nurture multiple growth engines tend to be unusually certain of their parenting advantages: the traits that allow them to create more value out of a business than their competitors. They don’t all parent the same way; just as in families, there’s no one way to raise a corporate “child.” What successful parent companies do have in common is an admirable consistency of purpose, during periods of benign growth and intense upheaval alike.

The growth of Hilti, the Liechtenstein-headquartered construction supplier famous for its electropneumatic hammer drills delivered in red cases, has shown the effectiveness of consistently applying a single parenting mode over many business cycles. Since its founding in 1941, the group has evolved from a small family company to a global player with 2020 sales of CHF 5.3 billion. It developed from a supplier of direct-fastening tools toward offering a full portfolio of electric tools and fastening and protection solutions.

Hilti’s parenting advantages have long come from its direct sales model. Unlike many rivals, it has largely refrained from engaging distributors, relying on a direct salesforce of about 17,000 people instead. This has given it a superior understanding of multilevel customer needs and innovation potential. As the common thread in the business, Hilti’s customer leadership has not just enabled the group to keep improving and inventing products and services; it has also empowered it to confront strategic challenges early.

Hilti was ready and prepared when its drills became so fast that further acceleration offered only marginal gains to the user. Its preemptive expansion into laser systems shifted the focus from “how can I drill faster?” to “how can I more quickly find the right place to drill?”—a process still riven with inefficiencies that could be chiseled away at on behalf of customers. Hilti has also been at the forefront of expansion from hardware to software and services, developing end-to-end solutions to support and augment the value of its products. With ON!Track, Hilti made a first step into a software solution independent from its hardware products, allowing customers to digitalize their equipment and material management processes.

Hilti’s management is now looking into a new challenge: how to leverage its parenting advantages into opportunities presented by the digitalization of the construction industry, be that through software, sensors integrated into the Internet of Things, or cloud-based data analysis. In short, its parenting advantages are poised to bring a distant adjacency into range.

Hilti is a customer leader, one of two parenting modes that hinge on operational outperformance. The other mode is the efficiency leader: a company that gains an edge through relentless process optimization and economies of scale. Danaher, the US industrial and medical conglomerate, is a prime example of an efficiency leader. It has a repeatable formula for adding value across its subsidiaries through its Danaher Business System, a set of tools and processes to keep improving business performance, and its well-honed merger integration capabilities.

Parenting advantages in portfolio management and beyond

At one end of the portfolio management spectrum, there’s the persistent owner that excels at long-term value preservation, often supported by careful stakeholder management and a mission that explicitly goes beyond mere profit. Persistent owners include Henkel, the German industrial and consumer products group.

At the other end of the spectrum lies the active buyer and seller. India’s Reliance Industries is a potent example of this form of parenting advantage. Initially in the yarn trade in the 1950s, it now has interests that span oil, gas, petrochemicals, telecommunications, retail, and media.

The capabilities that underpin Reliance’s parenting advantages include its skill at identifying areas in which it can create and scale up a new business rapidly and profitably. That skill was on display in 2016 when it created Jio, its mobile telephone arm and digital ecosystem, as a new growth engine far from its hydrocarbon core. Reliance’s habit of outinvesting competitors when it enters a new market tends to pay dividends too.

The interplay between the corporate center and business units—and how that activates a company’s differentiated capabilities—is crucial to building any parenting advantages. We call that a living strategy system (see Figure 2). One feature of Reliance’s living strategy system is that mature businesses get more autonomy than resource-hungry newer units. The front line is encouraged to use technology to test and learn new ways to gain scale and efficiency. And the whole conglomerate is infused with entrepreneurship.

Two more sources of parenting advantages are exhibited by companies that are particularly skilled at protecting and expanding their profit pools. The global scale leader often uses scale and deep experience to outinvest competitors. In aerospace manufacturing, for example, global scale leaders continue to gain an edge by investing heavily in rarefied technical expertise and unusually strong customer relationships.

Then there’s the multilocal champion that has specialist knowledge in a local market that’s nonetheless transferable across units. One example is Barry Callebaut, the Swiss cocoa processor and chocolate maker, which boasts superior commodity trading and sourcing capabilities, combined with deep expertise in West Africa and other markets.

Barry Callebaut’s sourcing presence involves a form of backward integration: It’s not active in farming itself but is intimately involved in supporting farmer productivity through technological initiatives and its reliability as a buyer. It further leverages its parenting advantages in other related activities, ranging from making a significant margin on commodity trading to providing outsourced work and services to large food producers.

The final two types of parenting advantages are displayed by diversified companies that manage to redraw the boundaries of industries in their favor. The first of these types is the serial disrupter: Think Tesla, Netflix, Adobe, and other companies that tap the power of data and technology to build new businesses before rivals. The other type is the platform builder, exemplified by the likes of Tencent and its ecosystem of digital services, Amazon Web Services (AWS), and Salesforce.

Patterns in the past, a path for the future

In order to look ahead, it’s sometimes necessary to look back. When companies begin the task of identifying and exploiting their parenting advantages, some of them find it useful to reconsider past chapters in their growth story as they gear up for future success.

For executive teams, this reevaluation can yield powerful insights, highlighting not just the true nature and boundaries of the company’s various activities, but also pinpointing the areas in which it genuinely excels today, and where it can sustain an edge tomorrow.

The questions you can ask as part of this strategic exercise include:

Answering these questions will help companies determine how their own parenting advantages have developed—and how they can be deployed to enable fresh chapters of growth. 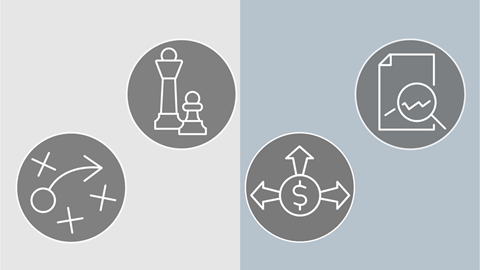