The climate for PE investment blew hot and cold over the past year. Taking 2011 as a whole, PE investments displayed many continuities with 2010. Not only did total deal value come in the same, but investment targets remained remarkably consistent, as well. As we discuss in detail in Bain’s Global Private Equity Report 2012, investment activity has settled into a “new normal” since 2009 that harkens back to pre-boom years, with buyouts concentrated in mid-market deals valued between $500 million and $5 billion in deals that spanned all industry sectors.

But 2011’s “split personality” turned what started out as a healthy year for PE investments into an unexceptional one, due to the dramatic fall-off in deal activity in the year’s second half. Conditions during the first six months of 2011 could hardly have been more auspicious for motivated PE acquirers to find eager yield-hungry lenders to help them bring deals to fruition from an ample supply of companies available to be acquired.

As the year began, more than 4,500 PE firms armed with nearly $1 trillion in dry powder were eager to put that capital to work before the clock ran out or risk sacrificing management fees and missing out on the opportunity to earn carry on investments. Bain & Company’s analysis reveals that roughly 36 percent of buyout funds larger than $1 billion, representing 60 percent of dry powder for these funds, were likely under pressure to put capital to work over the course of 2011 (see figure). These included funds from the 2006 through 2008 vintages that had called less than two-thirds of their committed capital and 2009 vintage funds that had called less than one-third. 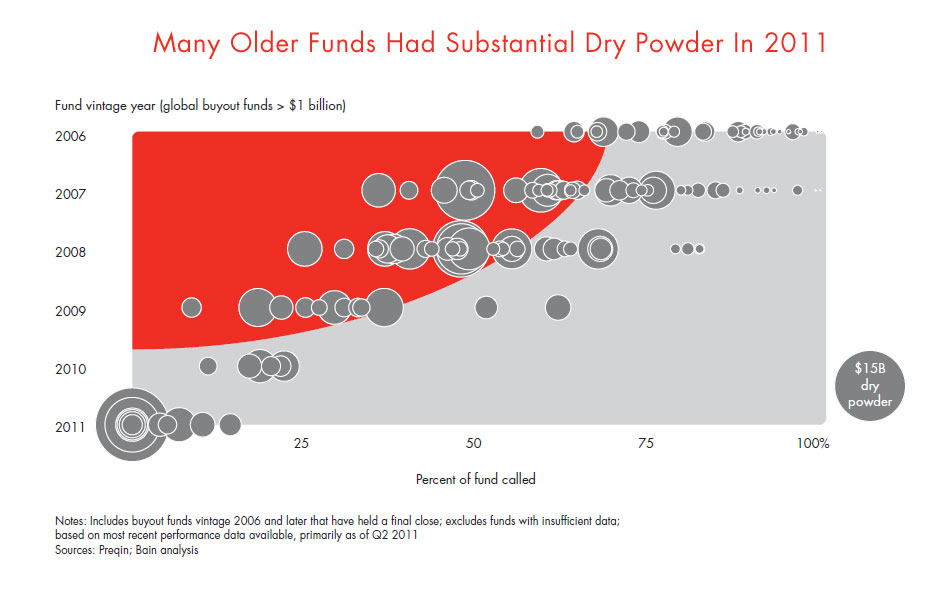 With so much buyout capital to deploy, competition for attractive assets would be intense. But buyout funds were not the only shoppers in the market. Corporate acquirers, their coffers also flush with cash, were on the lookout for strategic acquisitions that would help fuel their growth. The inevitable effect of the competition was higher transaction prices.

Did the pressure many funds felt to complete deals in 2011 distort market prices? Certainly the danger was real. About one-quarter of all aging dry powder was in the hands of PE funds with below-average performance track records, which might have had an incentive to recklessly bid up acquisition prices. Having only limited prospects to raise future funds, they have a powerful motivation to invest their remaining committed capital to extend the life of their firms and maximize their revenue streams. However, our analysis found that underperforming funds that might have behaved imprudently did not put disproportionately more capital to work in 2011 than either their better-performing peers or funds that were not facing use-it-or-lose-it investment deadlines.

GPs had a powerful ally in the favorable debt markets during the year’s first half. The ready availability of relatively low-cost credit made it possible for PE funds to secure financing on favorable terms for a far more diverse range of deals, including riskier ones, than in 2010, when generally only high-quality transactions got financed.

By early in the third quarter, however, market conditions in Europe and the US turned dramatically less hospitable to PE investment. A sharp and sudden rise in the cost of debt and the tightening of debt availability in the euro zone cooled LBO financing. Renewed signs of economic weakness and increased market volatility widened the mismatch between buyer and seller expectations, resulting in fewer deals agreed to in the year’s second half.

Costlier, and for some GPs scarcer, leverage combined with volatile equity markets inevitably drove a wedge between buyers and sellers. Growing uncertainty about the outlook for the economy left GPs unsure whether they could trust the forecasts built into their valuation models. The result was deal gridlock, with transactions stalling, offers being withdrawn or sellers deciding to wait out the volatility.

What does this bode for 2012? Certainly, the landscape looks more like it did two years ago than a return to boom times. Buyers and sellers are having trouble agreeing on values, exit markets remain anemic, and the portents for fund-raising are ominous. The industry remains awash in commitments, with nearly $1 trillion in dry powder still waiting to be put to work. Almost $2 trillion worth of assets remain on general partners’ books—more than 75% of them valued at below carry hurdle rates. And just as in 2010, spring arrived laden with ongoing sovereign debt concerns in the European Union, slowing growth in China, and other tremors that threaten to shake the foundation of the recovery.

So is it time for the PE industry to cash in its chips? Certainly not.

For one thing, the best investors continue to dramatically outperform their benchmarks and other asset classes. Pension funds, endowments, foundations and many other limited partners need this type of investment return to meet liquidity demands on their portfolios. Furthermore, the need for private capital is not going away—and for many sectors and markets, it is increasing. In our next post, we’ll look at why the PE investment picture is actually more favorable today than it might seem at first glance.

Where is private equity headed in 2012?

New challenges will require PE funds to rethink how they will achieve the superior returns their investors have come to expect.