The PE investment picture as 2012 began looked very much like the one that prevailed two years ago as the industry was clawing its way back from the depths of the downturn. But as we discuss in Bain & Company’s Global Private Equity Report 2012, conditions today are more favorable for PE deal making. Debt is available to finance a wider spectrum of deals, and there are also more companies suitable for PE acquisition. Two years ago, many potential PE targets were struggling to absorb the shocks of the credit crisis and the subsequent recession. Today, with their finances righted and costs under control, more companies are ripe for sale.

There is plenty of momentum to drive deal making forward in 2012. Nearly $1 trillion in dry powder remains widely dispersed among PE firms of all sizes and types worldwide. A sizable portion of the capital is held in funds raised during the big 2007 and 2008 vintage years. Burning off that backlog is apt to result in too much capital chasing too few deals.

Just how many buyouts ultimately end up closing, of course, depends in large measure on conditions of the debt markets, and here the outlook heading into 2012 is stable but not robust. Whether the supply of and demand for debt will continue to remain in their current delicate balance will depend on whether capital markets stabilize and the economic outlook firms up, unleashing a burst of pent-up M&A activity.

Just how likely demand will be able to keep pace with an upswing in deal making needs to take into account how the investor base for leveraged loans to finance those deals is shifting. There are five principal institutional sources of leveraged loan demand: collateralized loan obligations (CLOs); loan mutual funds; finance companies; insurance companies; and assorted hedge funds, distressed debt funds and high-yield funds. CLOs have been the “go to” source of debt financing for most of the past decade, accounting for as much as 75 percent of total institutional demand for leveraged loans between 2001 and 2007. But demand from this source will begin to wane in 2012, when the reinvestment period for about half of all legacy CLOs expires.

Who will fill the void? Looking at the cumulative leveraged-loan demand from all sources and based on past experience, Bain estimates that it could fall short of the projected loan supply by a sizable margin (see figure). Harder to predict is whether that gap will ultimately be closed by a ratcheting down of supply as loan arrangers limit volumes and the cost of debt increases or by a surge in leveraged-loan debt demand from yield-hungry investors. What we do know is that the credit markets over the past several years have been surprisingly resilient and responded nimbly to fill gaps in demand. If the past is a predictor of the future, credit markets will be accommodating for M&A activity in 2012, barring a blow-up of the euro zone. For LBOs that means spreads will stay in check, and debt will continue to be available for new deals.

Problematic debt markets are not the only potential barrier to PE deal making in 2012. Lingering uncertainty about economic growth in Europe and the US continues to make it challenging to close deals. Deal activity will not come close to reaching its full potential in 2012 unless the valuation expectations gap narrows. Until this cloud of uncertainty lifts, deal activity will likely concentrate on “trophy assets,” the most attractive properties in any industry and those in sectors seeing strong growth trends that will hold up even if the economy slows. 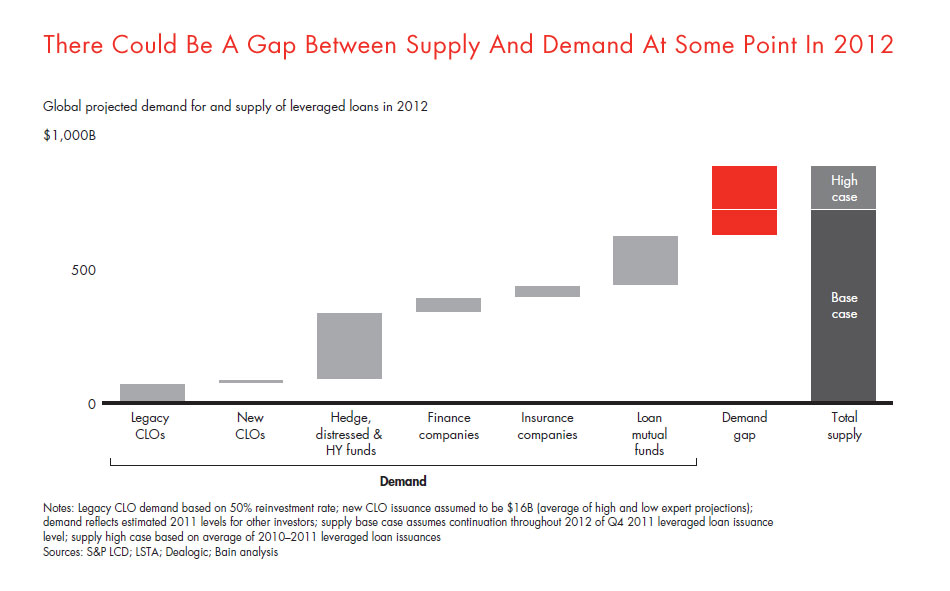 But is it time for the PE industry to cash in its chips? Certainly not.