Utilities executives have long had to balance the growth and investment needs of private companies with the demands of regulated public enterprises. But this challenge is becoming even more difficult as the industry’s economic outlook and relative competitiveness of the industry become less inviting in developed markets like the US and Europe:

Given this squeeze between mandated investments and flat-line growth, cutting costs is no longer an option, but a requirement for survival. Unlike conventional businesses, however, where savings drop neatly to the bottom line, cost reduction in regulated utilities is complex. Where those savings come from—capital, operations and maintenance or pass-throughs—matters greatly, as does where they get applied (rate relief, reinvestment or shareholder returns).

At Bain, we work closely with utility executives to develop sustained cost transformations that make sense in a variety of regulatory and competitive environments. In our experience, four areas offer the greatest potential for cost reduction: raising productivity at the front line, reducing external spending, streamlining organizations and pruning the portfolio of assets. This brief gives an overview of the constraints faced by utilities as they try to cut costs and offers tools to help executives think about where to find savings and how to make them stick.

A penny saved is a penny earned…sometimes

Transformation is difficult in any large organization, but it can be particularly challenging in utilities, where unique constraints create a culture that can be conservative by design. First among these are the sector’s unique economics. Executives in conventional businesses increase returns by growing margins and reducing capital deployed. Businesses in a regulated, rate-based model, however, generate earnings based on the prudent deployment of capital. The goals of reducing costs and raising productivity can be ambiguous, with some savings having a greater impact than others. A dollar saved in operating expenses looks the same to a customer, shareholder and regulator. But a dollar of capital saved is less valuable to ratepayers in the near term, has a negative impact for shareholders and, taken to its extremes, can compromise system integrity and reliability.

A closely related constraint is the scrutiny that utility executives work under. Regulators, investors, environmentalists, community advocates and ratepayers have overlapping and competing interests in utility decisions.

Utility executives may recommend a plan to reduce costs and hold down rates, only to find that the regulators who have to approve it may be more interested in investing in new technologies, alternative energy sources or job creation.

No excuse not to benchmark

Successful cost transformations begin with a clear understanding of a company’s performance relative to its peers. Utility executives often say their industry is difficult to benchmark because their environments and regulatory systems differ from one place to another. But in some ways, utilities are one of the most straightforward industries to benchmark because they perform essentially the same tasks wherever they are. There is also a wide range of public and proprietary data on their performance. At a general level, the Federal Energy Regulatory Commission (FERC) collects and reports data on utilities’ costs and performance in the United States. While we recognize the limits of these benchmarks, they are an obvious (and necessary) place to start (see below “Using FERC data to decompose the system average rate”).

Seasoned executives complement this data with diagnostics on functional performance. Several consortia collect and publish these metrics, and utilities use them to compare their performance to others. At a more granular level, utilities sometimes contract with firms to conduct open-book, peer-to-peer benchmark studies, comparing cost and performance with another utility in a similar environment. Occasionally, projects can get bogged down as executives try to define the perfect indicators, but leaders never let benchmarks stand in the way of progress. The goal is to get a good idea of where you are, and then move on to make improvements.

Increase productivity. It can be tough to reduce costs when the workload is growing, but it is still possible to work more effectively. Field services are a good candidate for productivity improvements, with call centers a close second. One utility in the US began its field-force improvement program with a diagnostic that revealed that less than half of its crew time was spent doing actual work and repairs. Administrative, travel and set-up tasks took up most of the time. Reactive scheduling, undefined roles, weak accountability and limited communication between foremen and planners were the main culprits. Field crews would go out for one job at a time, then return for their next assignment. Sometimes they would leave the yard without the right tools or materials and have to come back to resupply. By comparing the utility to its best contractors, executives saw an opportunity to improve field-service productivity by at least 30%. Their solution improved the quality of work orders, time estimates and scheduling. They also found ways for foremen and planners to communicate better and then sharpened accountability by tying behaviors to metrics.

Reduce spending. Over time, companies can build up legacy relationships with vendors and become complacent on price negotiations and service levels. Comprehensive and cross-company purchasing programs can give utilities more bargaining power and steeper volume discounts to reduce their procurement bills. They can also ask suppliers to take on tasks that they might have managed themselves, such as storing inventory or just-in-time delivery. Another US gas and electric utility uncovered tremendous value by optimizing its procurement processes. Procurement had been managed by multiple groups in the company, with little coordination or focus on reducing costs. To rein in costs, executives diagnosed total spending on non-fuel goods and services, establishing a baseline across the company. They developed a sweeping plan to get better deals that included buying in greater volume, reducing the number of different goods purchased and developing stronger relationships with fewer suppliers. They created more transparency in the procurement process across the company and set savings targets. The first year of the program saw price-on-price savings of about 20%.

Restructure. Process and organizational improvements, which take time to develop and integrate into a utility, deliver lasting value. One utility launched a two-year program to reduce costs and improve effectiveness at the front line and in back office functions. Identifying “shadow functions,” where remote sites had staff that replicated work done at the company’s functional center, yielded some savings. Standardizing common processes across the enterprise and eliminating custom, one-off initiatives also added value. Third, the utility streamlined the managerial layer and overhead resources throughout the back-office and frontline functions. For example, it streamlined its IT organization and focused capital investments with a prioritized enterprise-wide technology road map. Over two years, executives redesigned the company’s organizational footprint and developed a new administrative and general operating model with a smaller, simpler organization. This program reversed an operations and maintenance budget that had been climbing by about 6% per year, stopped its growth and took out more than $100 million over two years.

Manage the portfolio. Over time, through acquisitions and growth, most utilities accumulate a varied collection of service territories, wires and pipes and generation assets. Periodic reviews of their costs and performance can reveal opportunities to rebalance operations or pare the organization and let utilities take advantage of the shifting commodity prices. For example, as natural gas prices dropped in North America, many utilities idled coal-fired plants while running gas facilities at high loads. Others took measures to lock in a long-term fuel supply by integrating upstream into natural gas supplies. Some utilities have decided to get out of the business of serving widely dispersed rural districts or areas where the costs of complying with regulations outweigh the value.

Pulling it all together

As in any industry, superficial efforts to reduce costs are destined to fail; old habits have a way of creeping back into the system. In utilities, the stakes of success may be even higher: Given the regulated nature of the industry, many of the costs removed will be shared with ratepayers and may be difficult to win approval to restore.

In crafting a cost transformation plan, executives need to weigh the pros and cons of each savings area. Productivity improvements are easy to identify, but the savings are hard to monetize. Reducing spending is easy to do but hard to track into the company’s profit and loss statements. Reorganizations are typically the most painful savings to achieve because they involve reducing headcount, but they are also the most sustainable. Portfolio restructuring is more permanent but can be difficult to execute. Obviously, working all four areas together maximizes cost reductions and frees up funds to make new investments. Quick wins can be found in any of these areas.

Utility executives should keep in mind that less than a third of all corporate transformations succeed. A solid plan that carefully evaluates change, rolls it out efficiently and redefines behaviors increases the chances of success. It helps to think about cost transformation in three phases: design, deliver and embed (see the Bain Brief “Results delivery: Busting three common myths of change management”).

With all indicators pointing to slower growth in demand, tighter capital and heightened competition, the robustness of the utility industry is increasingly uncertain. Reducing costs is a “no regrets” move that can only benefit utilities in the years ahead. A sustained cost transformation is the best way to ensure that savings earned in the first year are not lost in the second. 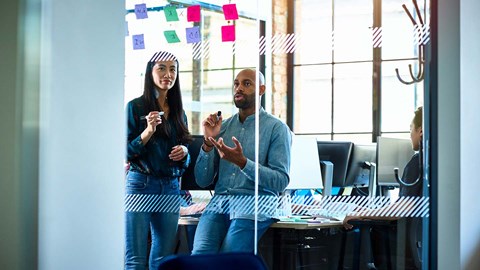