The decline in oil prices that began in summer 2014 has rapidly changed the basic economics of the global chemicals industry and generated widespread uncertainty. In the short term, additional supply from North American shale oil and continued high production levels from OPEC make a U-shaped recovery more likely than a sharp rebound. However, prices will need to recover over time to enable investment in exploration and production.

Over the past decade, oil prices have gone through at least two complete cycles, and more big swings are likely in the future. Chemical producers will have to continue to make short- and mid-term plans during this time of volatile prices. (For more on how low prices are affecting the upstream oil and gas industry, see the Bain Brief “Steering through the oil storm.”)

Movements in oil prices affect chemicals markets around the globe; however, this brief focuses on North America and Europe, where it is easier to isolate the impact from other input variables such as large GDP growth or political instability. Our analyses and conversations with chemical industry executives reveal a range of interesting effects of this price drop, depending on product mix and geography.

For any given chemical, the net effect of lower oil prices depends on the combined effect of all of these variables (see Figure 1).

Although the direct effects of shale gas have been largely confined to the North American market to date, low oil prices affect markets globally. And the impact varies by region.

In North America, the oil-to-gas price ratio averaged 17 to 1 during the first quarter of 2015. Many projects along the Gulf of Mexico base their business cases on the oil-to-gas spread, and this has changed fundamentally. Axiall recently decided to delay construction of an ethane cracker in Louisiana, a joint venture with Lotte Chemical, until after the first quarter of 2015 because of uncertainty in energy markets. In January, Sasol announced it would delay a final investment decision on its proposed large gas-to-liquids project in the US to conserve cash in response to lower international oil prices.

North America remains a very attractive environment to produce chemicals, particularly those based on ethane and those that require lots of energy to produce. Ethane is currently in surplus, so its prices track those of natural gas. Sustained low oil prices will reduce profits for some US petrochemical producers below recent peaks, but in many cases, they will remain above their average historic rates. Even if oil prices recover over the next three to five years, this is likely to be partially offset by increased production capacity.

European producers are still at a cost disadvantage compared with producers in North America, due primarily to the higher costs of natural gas and electricity. However, the gap has narrowed. Ethylene production costs in Europe were 3.5 times higher than costs in America in the fourth quarter of 2012; two years later, they had fallen to only 2.1 times greater (see Figure 2). European gas prices remain approximately 2.5 times higher than those in the US. Gas prices in Europe do not reflect the cost of gas supply—and the region is structurally short, requiring significant import volumes to meet demand. High prices for power raise the costs of all chemicals, but some see a particularly significant increase—for example, chlor-alkali and soda ash, which are energy intensive to produce.

The effect of lower oil prices also varies at the national level: Countries that depend heavily on oil, like Russia, are likely to see a drop in GDP.

Movement in foreign exchange rates is a compounding factor. The strength of the dollar creates new challenges for US crackers that export to Asia and Latin America. The drop in the value of the euro relative to the dollar is bad news if you buy in dollars and sell in euros.

No one knows when or how oil prices will change in the future, and the industry’s leaders must form their short-and medium-term strategies amid great uncertainty. However, we offer some strategies for consideration as executives chart their course through the oil storm.

“No regrets” actions deliver benefits in current and future price scenarios. The most important is removing costs. Now is the time to enlist the entire organization in reducing general and administrative costs to form a leaner organization. Tightening supply chains and increasing manufacturing efficiency will also help, as will renegotiating long-term feedstock contracts for both ethane (due to plentiful supply) and naphtha. With feedstock prices low, executives should also look for ways to actively manage the price spread, holding onto profit margins as long as possible. Innovation and differentiation also help increase price resilience.

Structural reforms to improve growth and profitability include aggressive operational or commercial actions designed to improve a producer’s position or capture new market opportunities. Looking 20 years out, North America remains attractive for investment. Subject to affordability, this could be an ideal time to push projects forward. The slowdown in upstream Capex investment means that costs have come down and engineering and craft labor are now more readily available than they were 12 months ago. However, feedstock prices could be quite different by the time new assets come online.

Conversely, European producers should focus on making the industry more resilient so they are better prepared when oil prices increase. One way to do this is by investing in facilities that enable them to import US feedstock. SABIC is converting its Wilton cracker in the UK from naphtha to US ethane, with completion planned for 2016. This follows similar investments by INEOS at Grangemouth in Scotland and Borealis at Stenungsund in Sweden. Such moves are complex and involve parallel investment in pipelines and NGL separation facilities in North America (either directly or through partnerships). Other actions include consolidating through mergers or acquisitions to reinforce existing positions, retiring uncompetitive assets, and reducing overcapacity while preserving scale and creating cost synergies. Examples include the 2005 sale of BASF’s polystyrene assets to INEOS and the 2014 merger of the chlorovinyls assets of INEOS and Solvay to form INOVYN.

In Europe, executives should also work with regulators to advocate for more integrated energy policies and for tax structures that encourage R&D and other investments in the industry.

Selective big bets radically reshape portfolios to refocus investment or shift the center of gravity to new opportunities. Dow Chemical, DuPont and Bayer are all spinning off non-core assets to focus their investments. Others in the industry are making significant investments in R&D or M&A as they seek out a new competitive advantage.

Uncertainty in the oil market has fundamental implications for how companies think about investments. Traditional accounting appraisal tools, such as net present value and internal rate of return combined with analysis of the sensitivity to input assumptions, are of limited use when the investments themselves are inherently uncertain. Bain’s approach is to develop a range of credible but extreme scenarios—including “black swan” events—against which to test alternative strategies. (For more information, see the Bain Brief “Beyond forecasting: Find your future in an uncertain energy market.”)

When a market’s future is unclear, and the upside from a successful investment outweighs the downside from an unsuccessful one, the best investment approach is to build a diversified portfolio. As in capital markets, some investments will fail, while others will pay back handsome returns. Uncertainty benefits larger, well-funded companies, for whom it is easier to diversify risk across a portfolio of investments rather than a single large bet. The effects of lower oil prices on chemicals producers are complex, benefiting some producers while hurting others. Over time, the industry will see more profound effects as companies shift production to lower-cost regions and seek to reinvent themselves and restructure the industry. As always, the winners will be those that take advantage of the opportunities created.

Piet de Paepe is a partner with Bain & Company in Brussels. Jason McLinn is a partner in Bain’s Chicago office. Mark Porter is a Bain partner in London. All three work with the firm’s Global Chemicals practice, and Mark leads the practice in Europe, the Middle East and Africa.

Beyond forecasting: Find your future in an uncertain energy market

By developing a set of future scenarios, executives can identify the indicators that tell which direction markets are headed. 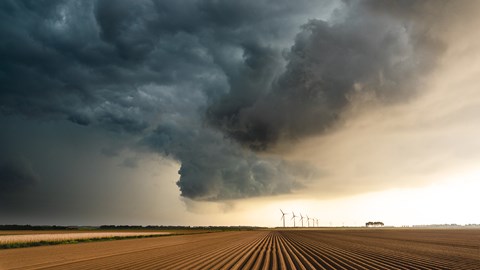