Listen in on MBA classes and corporate conferences and you will hear a lot of talk about the need for inspiring missions, ethical behavior and transcendent purpose. And judging from the "core values" statements in most annual reports, the vast majority of business leaders want their companies to grow by enriching the lives of their customers and employees.

And yet, this can often sound like so much fluff in the real business world. Our system of financial accounting rewards quarterly profits, but struggles mightily to place a value on ethical behavior. Even accounting rules specifically dealing with reputation—goodwill and intangible assets—are subject to frequent rule changes and endless debate.

Perhaps the accountants are just overcomplicating a basic idea. Reputation is earned through the simple, age-old concept of the Golden Rule: treat others as you yourself would want to be treated. Each time you live up to the Golden Rule, your reputation is enhanced; each time you fail, it is diminished. And the mathematics of long-term financial success—revenues, profits, cash flow—square perfectly with this scorecard.

We all want to be treated with honor and respect in ways, large and small, that enrich our lives. Such experiences not only make us happy, we want to share them with people we care about. By recommending an experience, we're signaling our trust that our friends will be treated similarly. Recommendations also signal to businesses how customers view their relationship with the company. When customers feel so well treated that they enthusiastically recommend a company to friends, they are promoters. When treated so badly they recommend avoiding the company, they are detractors. Both have direct and measurable economic consequences.

This is the concept at the heart of the Net Promoter system, which my colleague Rob Markey and I describe in our book, published last month. The Net Promoter system focuses the entire organization on generating promoters, who buy more, stay longer, refer friends and even provide useful feedback and ideas. It also helps minimize the number of costly detractors. A recent research project we conducted found that across multiple industries, the company with the leading Net Promoter score typically grew more than twice as fast as their competitors.

That should keep the accountants happy. But for companies, executives and employees, there's also an inspirational dimension: the system provides them with a practical way to measure how consistently they treat people right. You might call it the Golden Ruler.

That's how Walt Bettinger, chief executive of Charles Schwab, describes his company's Net Promoter system when recommending it to other CEOs:

"First, I ask them if they believe in the importance of the Golden Rule—that ancient moral and ethical principle that we should treat people the way we would want to be treated. They always nod emphatically and say, 'Yes, of course.' So then I ask them what they do to measure how consistently they and their organization are living the Golden Rule each day. Their typical response: 'Well, it would be great if we could measure it, but there's no practical way to do that.' To which I reply that there most certainly is a way. In fact, at Schwab, we have been using the Net Promoter System to measure our Golden Rule compliance for more than five years, and it works brilliantly. Net Promoter is the first screen I open when I boot up my computer each morning. It lets me know for each part of our company how we are performing in living up to our core values. By making NPS a top priority, we have become a better company—not just in terms of living our core values, but also in terms of profitable growth."

Bettinger is not alone. CEO Dan Cathy explains the winning strategy at Chick-fil-A in similar terms: "We strive to deliver something for which there is unlimited demand—being treated with honor and respect. There seems to be a very limited supply of that in today's world."

These CEOs have not discovered a new concept: in one form or another, the Golden Rule is a pillar of most of the world's great religions and it also lies at the heart of secular ethics. Business ethicists Paul Lawrence and Nitin Nohria describe the Golden Rule as an expression of the basic human instinct to bond with others.

The challenge executives face is how to put the Golden Rule into practice, especially when the lingua franca of financial accounting pushes the business to focus on short-term profits. "[M]orals are such a central and pervasive aspect of human life that we badly need a scientific way of understanding them," Lawrence and Nohria write.

As CEOs Bettinger and Cathy have discovered, a Net Promoter system provides one framework to do that. When properly installed and operated, it delivers financial growth. But it also shows that those MBA class discussions and annual report rhetoric aren't just fluff. If you build a way to measure it, you'll find that it really does pay to be good.

This post highlights the ideas in a new book by Fred Reichheld and Rob Markey, The Ultimate Question 2.0: How Net Promoter Companies Thrive in a Customer-Driven World (HBR Press). 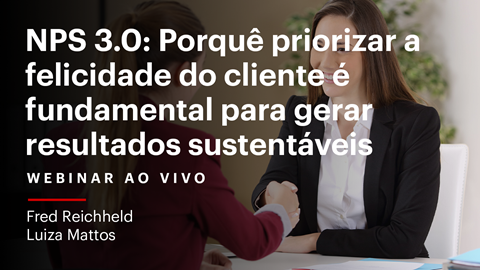