China has become the world’s biggest battleground for consumer goods sales as both foreign and local companies aggressively compete for shoppers with rising incomes. In this follow-up to our report “Growing brands by understanding what Chinese shoppers really do,” published in July 2013, we explore the intensifying battle between foreign and local players in the context of China’s rapidly evolving market. Our discussion builds on our groundbreaking research into the behavior of Chinese shoppers, first presented last year, and in particular, our report on the battle between foreign and local brands (see “What Chinese shoppers really do but will never tell you,” China Shopper Report 2012, Vol. 3).

Our insights are based on a joint study by Bain & Company and Kantar Worldpanel, in which we analyzed the behavior of 40,000 Chinese households from 373 cities in 20 provinces and four major municipalities. Over the past two years, this ongoing study has provided an unprecedented look at how shoppers purchase by region and by city in 26 important consumer products categories ranging from milk to shampoo (see Figure 1). The comprehensive study covers all Chinese city tiers, categories in different development stages and all shoppers’ life stages.

The market for fast-moving consumer goods (FMCGs) in China is characterized by slowing growth rates overall, but rapid adoption of e-commerce. Each of these developments has major implications for both foreign and local companies.

The overall slowdown in growth rates of FMCG categories that started in the third quarter of 2011 has continued through the second quarter of 2013. This is affecting both food & beverage (F&B) and other categories, and the impact can be observed in most of our selected 26 categories.

This slowdown is marginally driven by price, as the trend toward “premiumization” of brands continued during 2012 (through either the launch of premium products or a price increase for existing products). For the 13 F&B categories in the group we studied, the increase in price per unit (in kilograms or liters) between 2011 and 2012 was 9%, compared with 11% between 2010 and 2011 (see Figure 3). For the 13 non-F&B categories, the increase in price per unit between 2011 and 2012 was 4%, which is the same as the percentage change between 2010 and 2011 and a level slightly above inflation (see Figure 4).

Although the overall growth rate is slowing, the e-commerce channel is experiencing explosive growth. It is still early days for e-commerce in FMCG categories, as online sales represent approximately 1.8% of total 2012 FMCG sales value, yet the rate of growth is rapid, at approximately 55% from 2011 to 2012 (see Figure 5). E-commerce penetration (the percentage of households that purchased FMCGs online at least once a year) increased from 18% in 2011 to 25% in 2012 (see Figure 6). The average price per item was higher online, although the frequency of purchases was lower than offline.

Online penetration has increased across all 26 categories, and it has reached very high levels in baby products, skin care and color cosmetics. These categories account for approximately 60% of total e-commerce spending. In 2012, online sales represented 25% of total sales value for baby diapers, 19% for infant formula and approximately 10% for skin care and color cosmetics (see Figure 7).

Typical grocery categories, such as home care and beverage, are still emerging in e-commerce but growing rapidly. For example, the online revenues in the beer category accounted for only approximately 0.16% of the category’s total sales in 2012, but these revenues had a growth rate of 208% from 2011 to 2012.

To conduct an in-depth analysis of shopping behavior online, we selected two categories for which online sales are already significant: skin care and infant formula. In our previous studies, we identified skin care as a category in which shoppers exhibit “repertoire” behavior (the tendency to choose different brands for the same occasion or need) and infant formula as one in which they exhibit “loyalist” behavior (repeatedly buying one brand for a specific need or occasion).

Our in-depth analysis revealed that shoppers maintained their repertoire or loyalist behavior in these categories in the online channel: shoppers in the skin care category exhibit repertoire behavior online, just as they do offline, and infant formula is a loyalist category in both channels (see Figure 8). In fact, the repertoire nature of the skin care category may be more pronounced online compared with offline, owing to the wider range of choices available and the absence of constraints related to shelf space.

Consistent with this finding, the online market share concentrated in the top 10 brands is approximately 31% for skin care and approximately 80% for infant formula, which is similar to the levels in stores (see Figure 9). The top 10 brands are similar online and offline in skin care (although in a different order). For infant formula, the top brands differ online because of the recent introduction of online-focused brands such as Karicare, Nutrilon and Friso.

The state of competition between foreign and Chinese brands

In the changing environment, Chinese brands have performed better overall than foreign brands in most categories. Increased penetration in all city tiers has been the key driver of local brands’ success.

In 2012, Chinese brands captured approximately 70% of the market growth in our selected 26 categories and increased their market share by 0.5% (see Figure 10).

Chinese brands have dominant share in traditional F&B categories, as would be expected, as well as in home care. They are also very strong in categories that require local agricultural supplies, such as milk and yogurt. Foreign brands dominate categories that they have recently created in China (for example, gum and chocolate), and categories that are health related and for which trust is required (such as infant formula and baby diapers) (see Figure 11).

These developments make it critical to drive penetration both online and offline. The approach marketers select should depend on whether a category’s shoppers exhibit stronger repertoire or loyalist behavior:

Our findings related to foreign and local FMCG players reinforce a key insight set out in Volume 1 of our 2013 report: The era of growing brands by riding the wave of high growth rates for categories has ended. In most categories, brand growth will primarily depend on gaining market share, which means penetration is paramount.

As competition intensifies, we expect to see more consolidation in both the retail and FMCG sectors. But this does not mean that multinational companies will absorb local players. In fact, in recent deals between Tesco and China Resources Enterprise, Danone and China Mengniu Dairy, and Pepsi and Master Kong, the local companies have become the dominant partners. Which companies will emerge as market leaders in this wave of consolidation? Inevitably, it will be those that have the clearest understanding of the categories in which they compete and the behavior of Chinese shoppers. 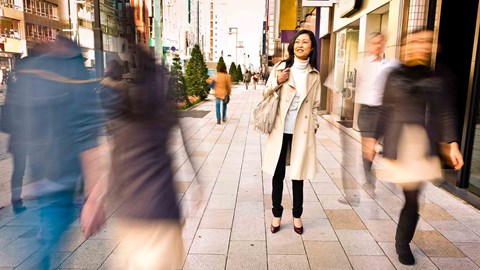