When a person's life is threatened, the body adapts superbly for fight or flight. Blood flow is diverted to the lungs and other critical areas. The pupils dilate to improve vision, and hearing is sharper. Breathing, heart rates and response times accelerate. The odds of survival improve.

If only a company could respond so brilliantly to the dangers of a downturn. Instead, executives often struggle to distinguish between core activities and less-vital functions. They look inward rather than outward. Their decisions are hampered by loss of concentration, diminished creativity and an inability to perceive and learn from new information. When that happens, the odds of survival deteriorate.

The goal of strategy in a downturn is to help you end up on the right side of the mortality tables—not just surviving but poised for growth, as Darwinian forces eliminate weaker competitors. To build that strategy, you need to know exactly where you will compete, how you plan to win and how you will mobilize the organization to implement the strategy.

View the larger version of this chart

Bain's analysis shows that concentrating on a company's core business dramatically improves the odds of success in a downturn. About 95 percent of the companies that we call sustained value creators—those that maintained at least a 5.5 percent real growth rate in revenue and profit over 10 years while earning back their cost of capital—are leaders in their core businesses. Strong cores also helped this group perform better and recover faster in the last downturn: average net profit margins bounced back to 6.5 percent in 2002, only slightly below pre-recession levels in 2000. Their competitors fared much worse, with average net profit margins falling to around 1 percent during the same period, a drop of about 3 percentage points. Again, it's like the human body: faced with threats, it relies on the fundamental systems at its core that afford the best chance of survival.

The key to a strong core business is a repeatable formula that allows the company to reinforce and expand the core in ways that won't later require retrenchment. The formula defines how the company intends to win. Its repeatability conditions the organization to move quickly and instinctively, the way years of practice helps great athletes develop the muscle memory that enables them to compete at the highest levels.

In our experience, most successful strategies are based on some kind of repeatable model that strengthens and expands the core. The power of a repeatable model is its simplicity. Everyone in the organization, in effect, knows the business's priorities, and has the skills and capabilities to make the core as strong as it can be. They can move fast when opportunities arise. In a slow economy, all that is invaluable.

Repeatable, however, doesn't mean unchanging. In fact, Darwin would say that adaptability is at least as important as fitness for survival, and recessions have a way of accelerating Darwinian shakeouts. The reason, of course, is that nothing holds steady in a downturn. Companies must make tough choices about which markets they can compete in most effectively and then revisit those choices as new information becomes available. They must make hard decisions about where they will develop world-class capabilities and assets and where they will be satisfied with "good enough" for now. Those decisions, too, need to be revisited regularly.

Often, the keys to adapting a company's repeatable model are found within the company's existing business. Unilever, for instance, has responded to recessionary trends in the US and Europe by expanding an innovative rural distribution model led by women's self-help groups to several emerging markets. Hindustan Unilever's shakti program, which enables unemployed rural women in India to set themselves up in business as direct-to-home distributors of Unilever's consumer products, is being adapted to Sri Lanka, Vietnam and Bangladesh. The women sell the products—usually in small, inexpensive packages—in rural villages not reached by other distribution channels. Unilever aims to use the low-cost distribution network to tap fresh avenues of growth in Asian, African and Latin American markets.

James Allen is a partner with Bain & Company in London and is co-leader of the firm's Global Strategy practice. Darrell Rigby is the head of Bain's Global Retail practice.

Two thirds. That's how much of the global profit pool is in turbulent industries like media, telecom, autos, airlines and financial services.

3x to 5x. During downturns, weaker businesses are the shock absorbers of their industries—their margin swings are often three to five times that of the leader.

Which companies bounce back, post-recession?

Companies that concentrate on their core business dramatically improve their odds of success in a downturn. 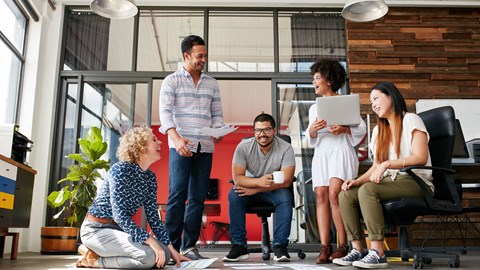