Beth Williams groaned as she looked at her computer monitor—another Monday, another product-development meeting. Later, she had a meeting with her own team and a get-together with marketing, plus a conference call. She glanced at the week’s schedule: half her time was already blocked out, and more meetings would flow in as the week dragged on. How could she ever get anything done?

If the meetings actually accomplished anything, it wouldn’t be so bad. But today’s product-development session would likely revisit a decision the group made two weeks ago. Jason hadn’t liked the outcome and had persuaded Dana, the group leader, to revisit it. And the marketing meeting, well, that would be a cookie-fest with slides about the current campaign. But if Beth didn’t go, people would start whispering. At this company, you were supposed to show up at meetings and say something smart. She wondered how Tony, the VP in charge of her unit, got away with never attending any.

She checked her email and saw yet another meeting invitation. She badly wanted to click “decline.”

Beth Williams is fictitious, but nearly every executive we know feels her pain. Senior leaders and middle managers at most companies spend more than 50 percent of their time in meetings. According to one survey, about two-thirds of meetings run out of time before participants can make important decisions. Not surprisingly, 85 percent of the executives surveyed are dissatisfied with the efficiency and effectiveness of meetings at their companies.

The trouble this situation causes goes well beyond annoyance. Meetings are essential to effective decision making and execution and thus to business results. The companies that are best at decisions—and that turn in the best performance—have learned to manage their meetings as carefully as they manage any other part of their businesses.

This article examines four ways to get your meetings back under control and turn them into the powerful performance driver that they ought to be.

Some meetings focus on decisions. Others don’t. The top performers scrutinize their calendars and, as a first step, do away with meetings in the “don’t” category. The key—the scalpel that lets you separate the important from the unimportant—is a clear understanding of your critical decisions. The list should include both big one-off decisions, such as major strategic investments, and more routine decisions that add up to significant value over time. If a meeting doesn’t bear on one of these decisions, cancel it.

Zero-basing your meetings in this fashion gives you an opportunity to eliminate superfluous sources of meetings. You can ax all the committees whose only job is to prep for other committees, along with all the other working groups that have outlived their usefulness. One electric utility found it had more than 70 steering committees that still met, even though their work was largely complete. The company had so many steering committees that it issued a moratorium on new ones. The moratorium spotlighted the issue of meetings and encouraged people to rethink which were really necessary. Depending on how bad things are, you may find that a mandate to eliminate unnecessary meetings reveals an opportunity for large-scale simplification. A well-known European retailer, for example, was suffering from slow, frustrating decision making. One committee would reverse another’s decisions. Some decisions had to be approved by three or more different forums. Managers were tearing their hair out: “I feel like I’m urging my team to wade through treacle,” said one. The retailer built a database of its committees and found that it had some 42 cross-functional groupings, plus additional committees within each function. Few had clear decision responsibilities.

To solve the problem, the retailer reorganized its governance system. One step was to subsume many of the committees into a single program board with well-defined responsibilities, such as overseeing execution against the business plan and budget. Another was to clarify the roles of each surviving committee. In the past, for example, the capital expenditures committee might have begun discussing the content of a menswear-redesign project; now its job was explicitly limited to approving or disapproving the proposed investment. The governance reorganization enabled the retailer to eliminate nearly 70 percent of committees, with an equally big drop in the number of meetings. The company estimated that the reduction would free up roughly 50 percent of the typical executive’s time. 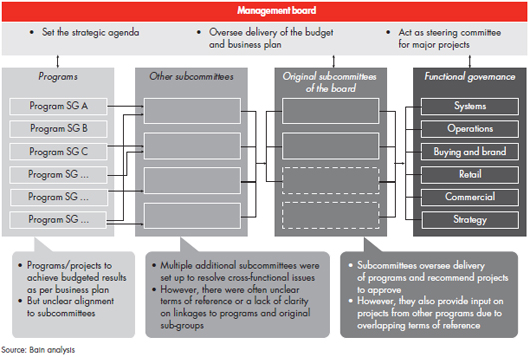 The fact that a meeting is supposed to focus on a key decision doesn’t mean that it will. But several companies have developed tools to keep people attentive to the matters at hand.

One such tool is announcing the meeting’s purpose at the outset. The University of California at Berkeley, for example, expects its staff to begin every meeting with a single statement: “The purpose of this meeting is to inform you about X, to discuss Y and to decide on Z,” where Z is a specific, well-defined decision. Using this kind of tool—we call it IDD, for Inform, Discuss, Decide—encourages people to move the “inform” items to pre-reading materials whenever possible. It’s a simple way of focusing a meeting on particular decisions while allowing for flexibility around the edges.

When a major natural-resources company was revamping its strategy and planning process, it noticed that its meetings lacked focus and weren’t accomplishing all they should. In response, the company mounted a four-part program to correct matters:

• Leaders began insisting on explicit clarity of purpose for every meeting.

• They designed each meeting’s agenda around what they wanted to accomplish—ensuring, for example, that short-term operations and long-term planning weren’t discussed in the same meeting. (People found it hard to keep the two separate.)

• They also changed the conduct of the meeting, with key decisions highlighted on the agenda and a recap at the end summarizing the points reached by the group.

Such measures enabled the company to improve decision effectiveness and maintain its industry-leading performance.

Meetings often include two groups: the participants and the audience. At some companies, many people make a point of attending all the meetings they can, just so they feel that they are in the loop. (We call them “business tourists.”)

The only people who should attend a meeting are those with a role in the decisions at hand. To clarify those roles, we use a simple tool called RAPID®, which is a loose acronym for Recommend, Agree, offer Input, Decide and Perform. Companies that are best at decisions explicitly assign each of the roles for key decisions. They expect meeting organizers to invite only the individuals assigned those roles to decision-making meetings.

Clarifying roles also enables companies to confront a chief cause of meeting proliferation and ineffectiveness: reopening decisions. That was a problem at Intel’s Embedded and Communications Group (ECG) where, according to general manager Doug Davis, “someone who hadn’t been involved [in a decision] early on would bring in a new piece of data, and we’d go back and revisit it.” Once ECG introduced RAPID, decisions were far more likely to stick. Today, says Davis, “We’re not thrashing around on things as much.”

Companies have also learned to keep meetings as small as possible. Our research highlights what we think of as the Rule of Seven: every person added to a decision-making group over seven reduces decision effectiveness by 10 percent. If you take this rule to its logical conclusion, a group of 17 or more rarely makes any decisions. Of course, a larger group may sometimes be necessary to ensure buy-in. But organizations trying to make important decisions should limit the size of the group as much as they can.

Sometimes meetings fizzle out and never reach a decision. Other times, the decision that everybody thought they made never gets implemented. In both situations, attendees start grumbling that they are wasting their time, and higher-ups decide that they won’t bother attending the next meeting. The best way to prevent all that is to ensure that meetings have consequences.

One tool is the decision calendar or decision log. It’s simply a file through which people track the decisions that are made and see that they are properly communicated to the organization. At a large entertainment company we worked with recently, senior executives found that they often struggled to reach closure at their sessions or, worse yet, failed to agree on what they had decided. By focusing team meetings on decisions and capturing the group’s actions in a formal decision log, executives were able to increase the pace of decisions significantly and dramatically improve the group’s follow-through and execution.

A second tool: ensuring commitment. When Jim Kilts was CEO of Gillette, he noticed that that there was a lot of hallway chatter after meetings, and that some executives were passively resisting decisions made in those meetings. So he asked his team to agree to a specified code of behaviors, including open and honest debate during a discussion and wholehearted support for the decision once made. To put some muscle behind the commitment, Kilts arranged for four separate annual ratings on executives’ behaviors—one from themselves, one from peers, one from direct reports and one from Kilts himself. The scores affected a meaningful portion of the executives’ bonus pay.

Occasionally, of course, people in a meeting will “decide not to decide.” But that’s a phenomenon worth watching. One company we worked with tracked its delays and found that it was postponing decisions about 60 percent of the time. As the company reduced this percentage, it sped up decision making and execution and reduced the effort for all involved. Not surprisingly, performance improved as well.

Because meetings are so common, many people rely on them to organize their daily lives at work. They also gauge their relative status by how many meetings they are invited to. So not everyone will be happy if companies reduce the number of meetings and cut down on the number of invitees. Some will experience what we think of as a meeting-withdrawal syndrome. We have developed a three-step program that will help reduce the syndrome’s effects:

1. Communicate why the organization is making these changes. Convey the idea that everybody will soon be attending fewer meetings—and that when they do attend one, it is likely to be more effective and productive than in the past.

2. Role-model the new behaviors. Leaders should attend those meetings where they play a decision role and avoid others. They should push back when someone tries to reopen a decision. Peers and superiors can recognize and praise these behaviors. Every meeting leader can adopt new techniques, such as a moment at the beginning asking, “Does everyone have to be here?”

3. Train people in the new protocols for meetings—the “new way of doing things around here.” The job here is to reorient expectations about what meetings will be held, how they will be run and who should attend them. Like other organizational changes, reining in meetings can be difficult at first. But you should soon find that your time is freed up, that your remaining meetings are far more productive than before and that your decisions are better and faster. The real-life Beth Williamses in your organization will appreciate it.

Michael C. Mankins leads Bain’s Organization practice in the Americas and is a key member of Bain’s Strategy practice. He is a partner in the firm’s San Francisco office.

Many companies overlook the roles that support good decision-making.