A recent study by three professors at Purdue’s Krannert School of Management is part of a growing mountain of evidence of the superior and more lasting performance of companies where the founder still plays a significant role as CEO, chairman, board member, or owner or adviser. Specifically, the study found that S&P 500 companies where the founder is still CEO are more innovative, generate 31% more patents, create patents that are more valuable, and are more likely to make bold investments to renew and adapt the business model—demonstrating a willingness to take risk to invent the future.

This begs the question, why?

When the founder is still involved, why are companies more innovative? Why are they able to increase value at a higher rate, willing to make bolder investments, and able to maintain more loyal employees?

Over the past decade, we at Bain & Company have been studying the deep roots of the most adaptable and sustainably successful companies. We started with the observation that profitable growth is becoming more challenging, and that only one in 10 companies achieve it over a decade. We confirmed this observation by developing a database of all public companies in the global stock markets and tracking their performance over 25 years. We found that the companies most successful at maintaining profitable growth over the long term were disproportionately companies where the founder was still running the business (such as Oracle, Haier, or LBrands), was still involved on the Board of Directors (like Four Seasons Hotels and Resorts), or, most importantly, where the focus and principles of how to operate that the founder had originally put in place still endured (as at IKEA or at Enterprise Rent-A-Car).

To find out why, we went out into the field. We did a series of interviews with executives and founders around the world, and analyzed another 200 founder-led companies with the help of an expert who knew each company well. What we found surprised us. Three sets of hard-edged practices and underlying attitudes, tracing back to the way the founder had set up the company, emerged consistently. In other words, how founders built their companies on the inside, from the start, influenced their companies’ success on the outside, for a long time.

We call these company practices “the founder’s mentality.” They are not vague cultural notions that are hard to pin down and take forever to change. Rather, they are grounded in concrete actions and an approach to business that can be studied and emulated with rapid results. And that is good news for all companies: most of the practices that produce this successful performance are observable, learnable, and useable by all leaders immediately.

The first is the unique, spiky feature, or capability that gives a business special purpose. We call it business insurgency. My co-author James Allen refers to this as waging war on industry norms on behalf of underserved customers, as Netflix did for video rentals, or to create a new market entirely, as Google has done, following its mission to organize all of the world’s information.

Many businesses lose this sharp sense of purpose as they grow. This is why only 13% of employees worldwide feel any personal engagement with their work at all. And engagement matters. Our research shows that engaged employees are 3.5 times as likely to solve problems themselves and invest personal time in innovation as unengaged workers. Imagine if all were engaged!

Lose this clear purpose and your company becomes directionless and uninspiring—especially to the millennial generation.

The second element of the founder’s mentality is a front line obsession—as the founder had. It shows up in a love of the details and a culture that makes heroes of those at the front line of the business and gives them power.

An example I love is how M.S. Oberoi, founder of Oberoi Hotels, role modeled this for the next generation of leaders. He scrawled responses on customer comment cards even at the age of 94 when he could barely see and had to hold the cards an inch away from his eyes.

Lose this deep curiosity for what is going on at the front line, and your company loses its instincts. At the extreme, your company becomes an out-of-touch bureaucracy where power shifts to corporate offices and to people who may never have served a customer or made a product.

The third element is an owner’s mindset, the fuel that propelled the rise of private equity, whose essence is dialing up speed to act and taking personal responsibility for risk and for cost.

This has been central to the success of AB InBev, the $50 billion world leader in beer. The company states at the top of its list of principles that “we are a company of owners and act like one” and translates that idea into minute detail throughout the whole company.

Lose the owner’s mindset and your company becomes complacent, slow to act and decide, and risk averse. Leaders can easily turn into custodians and then into bureaucrats, and bureaucrats are especially vulnerable today.

Our research shows that companies that maintain the founder’s mentality as they age are four to five times more likely to be top quartile performers. For instance, an index of Fortune 500 companies in which the founder is still deeply involved performed 3.1 times better than the rest over the past 15 years.

Some of the most successful venture capitalists, like Andreesen Horowitz have been quite vocal about their strong preference for investing in businesses where the founder is the CEO. In fact, most of the great tech firms—just think of Oracle, Intel, Microsoft, Apple, Dell, Google, Amazon, Facebook, and so many others—had founder CEOs, often for a long time. In his blog, Ben Horowitz lists three reasons his VC firm prefers founder CEOs: founders have the moral authority to make the hard choices, they know the detail of the business and have better instincts, and they have a long-term perspective on investments and building a company that lasts.

The implication for today’s business leaders? Cultivate a founder’s mentality as a key strategic asset, and talk about it, measure it, monitor it, and reward it. We believe it is the most important indicator of the health of a company on the inside—which is almost always where the deep root causes of failure to perform on the outside reside. The founder’s mentality is an indicator of a company’s readiness to act quickly, to adapt to change, to retain the ground-level instincts of a founder, and to innovate to invent—and not fight the future. 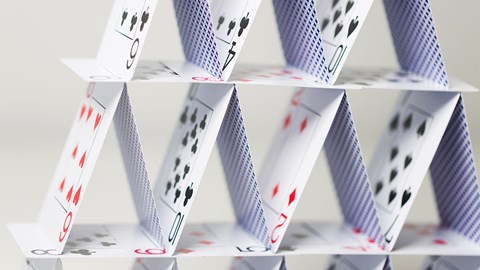