In recent years, national oil companies (NOCs)—state-controlled oil majors—have developed global reach and influence. They operate on an international scale. They compete with major private international oil companies (IOCs) to acquire exploration, development and production assets, both in their national markets and abroad. They have also increased their investment in research with the aim of developing new technologies for global exploration and production. Malaysia’s PETRONAS, for example, now operates in more than 35 countries. Chinese and Indian NOCs are making deals in Africa, the Middle East, Latin America and Central Asia. Brazil’s Petrobras has developed leading-edge technology for deep-water exploration, development and production.

Many NOCs have also begun to play a more influential role in their home markets. By increasing the percentage of local suppliers for their oilfield service needs, they are becoming conduits for capital, technology and knowhow. Many of the NOCs seek to nurture entrepreneurship and foster globally competitive businesses in energy-related sectors—and that creates an opportunity to promote new areas of competitive advantage and strengthen existing ones for their home countries. In principle, they can become powerful engines of socio-economic change—not just earning wealth but also spreading the economic benefits of a competitive oil sector.

Norway’s NOC, Statoil, has led the way. In partnership with the Norwegian government, research institutes and universities, Statoil has succeeded in nurturing a vibrant and flourishing oil and gas industry. Despite declining Norwegian oil production, Norway’s oilfield services companies—including PGS, Subsea 7, Seadrill and Aker Solutions—are now globally competitive and generate wealth for their home country. Our research and experience suggest that other NOCs also can become instruments of social change and economic development by focusing on initiatives that have the potential to create global impact.

What are these initiatives? First, NOCs must put their own houses in order by bringing their managerial and operational standards up to global levels. Second, they can pursue a thoughtful strategy of localization that steadily builds the scale and capacity of domestic suppliers and sets them on a trajectory to become globally competitive. Finally, they can lead the development of globally competitive clusters—geographic concentrations of interconnected companies, specialized suppliers, service providers and associated institutions—in related sectors, thereby increasing productivity and lowering the cost of doing business. Let’s examine these three kinds of initiatives.

Overstaffed and underinvested. Inefficient, politically led and bureaucratic. Many NOCs have faced such criticisms at various points in their histories. But most are now transforming themselves into professionally managed, efficient, lean enterprises capable of competing with the traditional IOCs. Both PETRONAS and Petrobras illustrate the transformation:

What sets these companies apart? They realize that the most important localization effort begins with the NOC itself. Only when an NOC acquires technical and managerial capabilities on a par with those of IOCs can it compete externally and sponsor a thriving domestic oil and gas industry.

Both PETRONAS and Petrobras succeeded in creating a local oil and gas industry base. Their high technical requirements spurred local suppliers to improve operations. In Malaysia, the number of local suppliers established in the wake of PETRONAS’s growth exceeds 2,500 by some estimates. In Brazil, local content in both upstream and downstream operations has risen to more than 70 percent, thanks to the “Petrobras effect.”

Since every government has its own priorities, each country’s NOC interprets and defines localization differently. In the UK, localization means sourcing goods and services in a competitive market from a locally established base, regardless of where the suppliers are headquartered. Nigeria and Malaysia are more stringent: they require oil companies to buy supplies and services from companies that are locally owned. In some countries, the origin of materials may not matter so long as the oil companies procure goods and services through local agents. The Sultanate of Oman and other Middle Eastern nations expect oil production companies to help stimulate the growth of local contractors, mentoring and providing expertise to entrepreneurs.

Whatever the governmental expectations, leading NOCs have their own views of localization. They typically insist on local contracts not just to support domestic companies, but also to develop suppliers that can compete globally. They recognize that unless the scale of oil reserves is large enough to sustain business for local companies in the very long term, benefits such as preferential contracts can have only limited impact.

Norway again led the way. As domestic production peaked, the country recognized that Statoil and the Norwegian oilfield service companies would need to become more international in their operations. They also would need to compete with IOCs and other global service companies if they were to generate wealth for Norway. So the country focused on developing local suppliers with strong R&D capabilities. Between 1977 and 1980, Norway established “Goodwill Agreements “offering preferential access to new concession blocks to oil companies that invested more heavily in R&D with Norwegian researchers in Norwegian institutions. The more critical the technology and the greater the investment, the more preferential was the access to new blocks.

The Nigerian National Petroleum Corporation’s (NNPC) directive on local content also resulted in a thoughtful, staged development of the country’s oil industry capabilities, in this case by Shell. The company launched a major effort to comply with the NNPC’s directive, which is based on a simple premise: as Nigerian suppliers, they secure larger contracts as they acquire more capabilities. Shell provides knowledge transfer, training, bidding preference and financing to those companies. Over time, those steps ensured that nearly 90 percent of all Shell contracts went to Nigerian companies. Shell is increasingly steering these companies into more critical and more technologically intensive applications with greater added value. 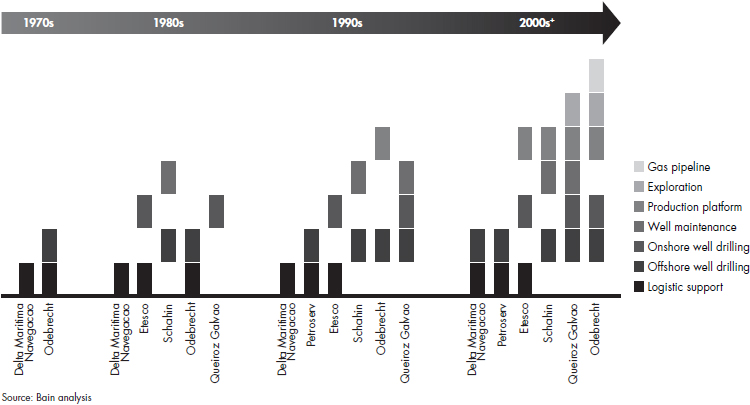 From Silicon Valley to Bangalore, it’s no secret that regional clusters of companies related to a particular industry generate powerful forces of economic development: more innovation, greater productivity and a surge in entrepreneurship. Academic studies reinforce this understanding of clusters’ economic strength.1 Certain products among the 775 most globally traded tend to appear more frequently together in the export agenda of countries, implying synergies in the factors related to their production. Consider, for example, oilfield services, the machinery sector, chemicals, petrochemicals and fertilizers.

Governments that think long term and are backed by their NOCs have the opportunity to pursue cluster-based development of their countries’ oil and gas sectors, rather than single-mindedly trying to attract foreign direct investments. They can carefully analyze which clusters are worth considering—oilfield services, machine tools, petrochemicals, automotive or others that might have synergies with oil and gas either through expanding locally in the downstream value chain (petrochemicals, fertilizers, fine chemicals) or by enabling the development of suppliers of goods and services that are shared between the clusters (machine tools, heavy equipment, electronics). They can try to understand which factors a given sector might require at each stage of development and what the sector can contribute back to the system. Finally, in choosing the clusters to prioritize, they can consider the perspective of investors, the local population and the government itself. Successful cluster strategy can help balance three outcomes: sustainable, long-term generation of local jobs and wealth; improvement of public accounts; and the creation of attractive returns for investors.

Norway, for example, strengthened its development effort by going beyond oilfield services to pursue a macro-cluster arrangement. It created a vibrant environment for trade in products and services—as well as qualified technicians, engineers and researchers—between the different clusters. This robust intellectual and capital environment was one of the keys to the survival of the Norwegian industry in the mid-1990s. At the time, the decreasing scale of North Sea developments required efforts to increase competitiveness through technological development and internationalization along all parts of the value chain. Institutions such as INTSOK (Norwegian Oil and Gas Partners), which focused on promoting the globalization of local companies working in the sector, reinforced the effort. Today, Statoil still invests heavily to maintain Norwegian Continental Shelf’s (NCS) competitiveness, including sponsoring an incubator program that provides seed funds, research infrastructure, technical expertise, project supervision, pilot tests, end-user competence, product commercialization support and direct company investments.

Brazil is also reaping the rewards of cluster-led economic development. Already benefiting immensely from its ultra-deepwater pre-salt oil fields, the country is attracting local R&D investments not only from companies like Schlumberger, Halliburton and Baker Hughes, but also from Petrobras, Repsol, BG Group, Shell, ExxonMobil and Chevron, which operate different pre-salt concessions. And Brazil already has an established base of heavy industries (steel, mining, pulp & paper), machine tools, electronic and automotive clusters, represented by local and locally established multinational players.

In the future, like Norway, Brazil can create a macro-cluster, forging powerful connections between robust local oilfield services clusters. The connections can extend all the way from direct suppliers to the oil companies to the companies that supply equipment and materials to these suppliers. Today the world is coming to Brazil to participate in the pre-salt developments; tomorrow, Brazilian companies will be going to the world as competitive players in the new exploration frontiers. It has happened before: Embraer, the Brazilian aircraft manufacturer, benefited from the industrial and academic cluster around São Paulo and emerged as a competitive global player.

To make the cluster approach work, each country must understand its point of departure, its proposed point of arrival and all the potential paths between the two. For example, while Angola can probably consider a socioeconomic development path that includes petrochemicals, automotive and electronics, São Tomé e Príncipe, with only 180,000 people (less than half the size of Luxembourg) needs a different approach.

While there is no one-size-fits-all solution, successful NOCs share some traits. The best NOCs not only channel capital, technological and operational know-how into the country, they serve as custodians of their nation’s wealth. Ideally, they help insulate the socioeconomic development strategy from pulls and pressures, and they guard its integrity as the country moves through economic cycles. Most important, they maintain a steady course in the quest for global competitiveness. The best NOCs serve national interests the most when they bring global standards home.