Today’s executives spend a lot of time managing the balance sheet, despite the fact that it doesn’t represent their company’s scarcest resource. Financial capital is relatively abundant and cheap. According to Bain’s Macro Trends Group, the global supply of capital stands at nearly 10 times global GDP. As a result of capital superabundancy, global quantitative easing and relatively low demand for investments in R&D and capital projects, the after-tax cost of borrowing for many companies is at or near inflation, making the real cost of borrowing close to zero.

In contrast, today’s scarcest resource is your human capital, as measured by the time, talent and energy of your workforce. Time, whether measured by hours in a day or days in a career, is finite. Difference-making talent is also scarce. The average company considers only about 15% of its employees to be difference makers. Finding, developing, and retaining this talent is hard—so much so that the business press refers to a “war” for talent. Energy, too, is difficult to come by. Though intangible, it can be measured by the number of inspired employees in your workforce. Based on our research, inspired employees are three times more productive than dissatisfied employees, but they are rare. For most organizations, only one out of eight employees is inspired.

How can we manage human capital better?

Measure it. As the adage goes, you can’t manage what you can’t measure. A veritable alphabet soup (ROA, RONA, ROIC, ROCE, IRR, MVA, APV, and the like) exists to measure our financial capital. To measure human capital, you can deploy metrics such as our productive power index, which looks at the cost of organizational drag and the benefits of effective talent and energy management on your overall productive power. You can measure the amount and value of the time that you put against projects or initiatives, and you can measure the return on that time. You can actively measure the amount of difference-making talent that you have in your organization. When Caesars Entertainment, a gaming company, reorganized operations in 2011, the senior team not only developed a database on the performance and the potential of the company’s top 2,000 managers but also analyzed the ability of the top 150 to take on new and different jobs.

Invest human capital just like you invest financial capital. For financial capital, the business world has developed concepts such as the opportunity cost of capital, which is reflected in a company’s weighted average cost of capital. We measure the lifetime value of investments, and we establish hurdle rates before deploying a single dollar of capital. We run Monte Carlo simulations to evaluate various returns under uncertainty. For human capital, we need to start thinking about the opportunity cost of a lost hour. One way to do this is to measure the cost of meetings. My colleagues at Bain discovered that a weekly executive committee meeting at one company consumed 300,000 hours a year in support time from departments across the company. When Woodside, an Australian oil and gas company, took a hard look at meetings, it discovered that they were consuming 25%–50% of staff’s time. A series of pilots reduced meeting time by an average of 14% among the pilot groups—a time savings equal to 7% of those groups’ full-time equivalent capacity. We should think about projects in terms of hours and dollars as well, and before taking on a new meeting or new initiative, include the opportunity cost of time and talent in the hurdle rate.

Monitor it. Teams of financial planning and analysis professionals measure actual and expected results for financial capital. Investment management committees evaluate new investments. Capital expenditure plans are subjected to detailed board reviews. We all must submit capital approval requests to release funds. Similarly, for human capital we should do periodic reviews of how much controllable organizational drag we have in our organization and what actions we are taking to compress it. Many big data tools, such as Microsoft Workplace Analytics, can provide detailed reviews of how we use time. For talent, we need to know who our difference makers are and whether they are deployed in mission-critical roles and initiatives.

Consider the case of one B2B supplier that wanted to figure out what made some salespeople top performers. A statistical analysis of metrics from Workplace Analytics and other factors revealed that top performers and average performers spent their time differently. Some of the differences were obvious: spending an average of four more hours per week than other reps communicating with customers, or being 25% more likely to cross-sell. But some behavior was surprising. For example, top performers were three times more likely to interact with multiple groups inside the company. In other words, they connected with people who could help them with customer issues, such as staff in ﬁnance, legal, pricing, or marketing.

Recognize and reward good management of time, talent, and energy. Historically, successful investment of financial capital can make someone’s career. Variable compensation is often tied to some measure of economic value added. Even though most companies no longer offer lifetime employment, they should still find a way to create a lifetime of assignments for their difference-making talent and work hard every day to re-recruit them by creating a working environment that is inspiring and results oriented. When Reid Hoffman founded LinkedIn, he promised that the company would help advance the careers of talented employees who signed on for two to four years and made an important contribution, either offering them another tour of duty at LinkedIn or supporting their efforts if they moved on. This tour-of-duty approach helped attract and retain entrepreneurial employees.

Leaders should be measured and rewarded on their inspiration quotient. They should also be measured and rewarded for building a talent balance sheet: how many high-potential individuals they have recruited, developed, and retained, and what is the trade balance of talent—that is, the net imports of high-potential talent into their group minus exports. A company’s actual values, reads Netflix’s famous HR playbook, “are shown by who gets rewarded, promoted, or let go.”

These are only some of the ways that we might begin to bring greater discipline to human capital management. There are likely many more creative solutions out there. Time is finite. Talent is scarce and worth fighting for. Energy can be created and destroyed. The sooner we act on these beliefs, the sooner we will get the return on human capital that we deserve. 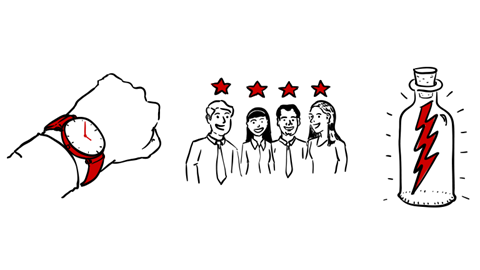 In an age where capital is superabundant, your most precious assets are the time, talent and energy of your workforce. 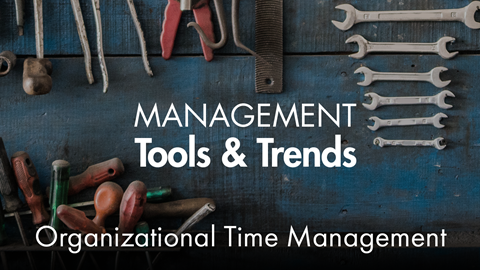 Organizational Time Management views time as a scarce resource that must be invested as effectively as financial resources.