Some businesses shine in the good times, but crash when the economy sputters. Others glow in the economic dark. But what kind of company prospers in both good times and bad? That was the question we sought to answer in a Bain & Company survey of 96 Canadian companies from 1992 to 2002. Very few of them—only 17.7%—grew profitably in that boom-and-bust decade. And the Bain study didn't set onerous standards for profitable growth: we were just looking for companies that grew revenues and earnings 5% faster than the economy, plus had shareholder returns (including dividends) of at least 5% more than their cost of capital per year.

It doesn't sound like much, does it? Yet only 17 of 96 publicly traded companies in our study passed the test. So how do the winners do it? How do they differ from all the other companies that failed the test? After studying successful growth companies in Canada and around the world, we learned that the long-term winners—in boom and bust—share some key vital signs.

First, they focus on their core business. Nearly 80% of the winners focused on one core business with clear market leadership. They resisted the temptation to branch out into businesses that lay too far outside their core. Trying out a new business is a risky proposition: fewer than one in four attempts to grow outside the core succeeds, according to a survey Bain did with the Economist Intelligence Unit. Take Anheuser-Busch, which makes Budweiser beer. The brewery launched Eagle Snacks, the maker of Cape Cod potato chips, in 1984. Now, beer and chips might be a great match in the bar, but they're not in business. While Anheuser-Busch was toying with chips, it missed the emergence of the microbreweries. Sales and profits stalled. When the brewery finally sold the potato chip business, the beer side recovered, and from 1996 to 2002 compound annual earnings increased by 8% per year.

Second, when winning companies do expand outside their core, they proceed in a disciplined way to find businesses a step or two outside of their core—not way out of the ballpark. To do this, they have to define the competitive, customer and product borders of their core business. This clear definition is crucial in assessing whether a new business is sufficiently related to the core to make sense. It also explains why Wal-Mart was ranked No. 1 in the Fortune 500 last year, while Kmart filed for bankruptcy. They both opened their first stores in 1962. In the next 40 years, Kmart diversified wildly—home improvement, drugs, specialty sports, office supplies, books—while Wal-Mart stuck with its core concept, the traditional discount big-box store. Wal-Mart understood its core; Kmart never got it. In Canada, Loblaw Co. has mastered the art of measured expansion. The grocer, once a second-tier player, first built a better chain, then expanded into other retail formats, like No Frills, that targeted different kinds of customers. They built a very powerful private-label brand and have used it to offer financial services in Loblaws stores. They also sell everyday household goods and services, like photo finishing and prescription drugs. Each step has been built on the foundation of a strong core; each step has strengthened the core.

Third, companies that grow profitably over the long term tap the full potential of their core business. It's easy to underestimate how much sales and profit growth you can tap out of the core. Even market leaders make this mistake; in fact, they can be the worst offenders. In 1993, for instance, Dell thought its incredibly successful model of selling personal computers direct to the customer had peaked. So Dell signed a deal with Wal-Mart to sell PCs in the big-box stores. Fortunately, Dell pulled out when it realized that selling retail was very different from selling direct. So it went back to the core and found ways to spur enormous new growth in direct sales. Instead of spreading the money over a range of businesses, Dell, like all successful growth companies, re-invested in its core.

The bottom line: profitable growth is rarer than you think, but it is possible to achieve, as long as you focus on the core. Mine it for its full value. Define its borders and its characteristics. Then you'll be able to identify profitable opportunities in your core, and outside it.

Alistair Corbett is a director of Bain & Company in Toronto. 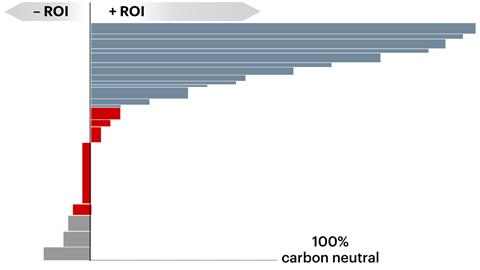