You’re a country manager at a large equipment company. The company has made several acquisitions recently, and somehow it never fully incorporates the acquired organizations into its matrix management structure. Now you have three, four, even five bosses who must sign off on major decisions.

You’re a product-design manager for a regional division of a global auto manufacturer. You believe your department has final responsibility for the features that will be included in every new car model. Unfortunately, most of your colleagues in marketing believe that they have final responsibility. The only way to get a decision is to escalate the dispute to executives too high up and too busy to understand the necessary trade-offs.

You run a factory for a UK–based packaging company. You have always dealt with local customers, and those customers have appreciated the fact that they could call you to, for example, change the production run. Now the CEO has created a Europe-wide organization with separate groups handling sales and manufacturing. You no longer have direct contact with your local customers—and they are not happy about it.

Welcome to the matrix organization, also known as the networked or “boundaryless” company. It’s a world of multiple bosses, endless solid-line and dotted-line reporting relationships and—as these three real-world examples show—murky accountabilities. It’s also a world of frustrated managers and employees, people who feel that they can’t take effective action or deal with a customer without running into a series of organizational obstacles. In this article we will offer 10 interrelated techniques for clearing away those obstructions. And we’ll try to show you how your company can make the matrix into an engine of high performance.

Basics first. Originally, the matrix involved shared profit-and-loss accountability. The double solid lines on the organization chart indicated that at least two executives bore equal responsibility for a P&L. Many managers reported directly to two bosses, both of whom technically had authority for specific decisions. This was almost always a recipe for organizational confusion; a dog with two masters, so it is said, is likely to die of hunger. So most companies have consigned this kind of rigid matrix to history’s dustbin.

But some form of more sophisticated matrix is essential for running any large, complex organization. A global consumer products company, for instance, must respond to local market needs and capitalize on global economies of scale. It needs organizations at both levels, and it needs the ability to manage across those boundaries—a matrix, in other words. In today’s world, moreover, the complexity of any matrix is likely to increase. That same company might also need programs for global functional excellence, for example. As one CEO puts it, “the matrix is becoming a cube.” Indeed, when executives talk about crossing organizational boundaries, in our experience, they’re likely to mean not one or two boundaries but five or six, such as function, geographical region, process, product, customer and channel.

The trouble is that many companies have not yet mastered this multifaceted matrix. People find it hard to get things done. The company loses opportunities. Good employees get fed up and begin to look elsewhere. Individuals who thrive in this sluggish environment tend to focus more on managing bureaucratic processes than on achieving business results.

The decision approach. To make the matrix work—to turn it from a drag on performance into a source of support—requires a company to redirect its attention. Instead of concentrating on the solid or dotted lines of the org chart, leaders in effective matrix organizations focus on decisions.

Decisions, after all, determine performance. Better, faster decisions and better, faster execution naturally produce better results than do poor, slow or badly executed decisions. This connection between decisions and results is intuitive; it’s also supported by data that we gathered from more than 760 companies around the world. Decision effectiveness and financial results correlate at a 95 percent confidence level or higher for every country, industry and company size we studied.1

Companies that rate best on decision effectiveness take two steps that other companies often ignore. First, they identify and concentrate on their most important decisions. This category includes not only the obvious candidates—big decisions involving a lot of resources—but also the routine everyday decisions that deliver (or fail to deliver) a great deal of value over time. Second, these companies work hard to optimize not just the quality of their key decisions but also decision speed, execution and the degree of effort involved. High performance organizations excel on all four dimensions.

A well-functioning matrix can actually help decision effectiveness rather than hinder it. The key lies in the 10 lessons summarized in Figure 1. We’ll add a brief word of explanation about each one. 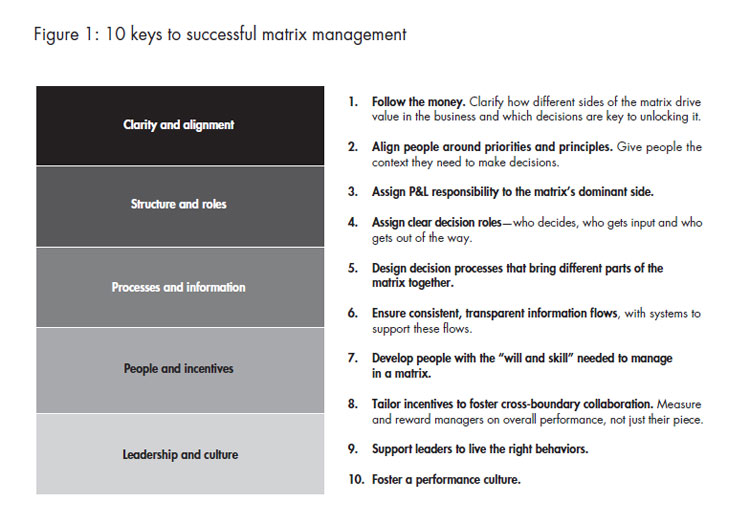 A matrix is often like a maze, hampering quick action. But a decision-focused matrix built on these 10 precepts—clear roles, good information, appropriate incentives and all the rest—contributes to quick, thoughtful action and thus to high performance. 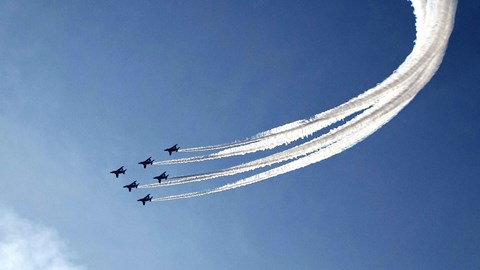 In these turbulent times, flexibly prioritizing and allocating resources helps companies make good decisions and focus on what matters most.