Exit activity stormed into 2011 on a wave of momentum and GPs’ optimism. As we report in Bain & Company’s Global Private Equity Report 2012, majorities of GPs were overwhelmingly bullish on conditions they anticipated awaited sellers in all three major exit channels. Equity markets were highly receptive to IPOs by high-quality PE-backed companies with strong growth stories to sell. Interest in sponsor-to-sponsor transactions remained robust, as motivated PE sellers eager to off-load assets found eager PE buyers with plenty of dry powder to deploy. And with corporate acquirers sitting on deep cash reserves and refocused on growth in an improved macroeconomic environment, asset sales to strategic buyers looked promising.

Sales got off to a slow start during the first quarter, but by the second quarter, exit activity was firing on all cylinders. The value of IPOs and sponsor-to-sponsor exits hit levels not seen since before the market meltdown, and sales of buyout-backed assets to strategic acquirers soared to record heights, totaling more than $75 billion.

The continuation of favorable exit conditions into 2011 gave PE firms a welcome opportunity to convert unsold portfolio holdings into realized gains. PE funds were sitting on a large pool of unrealized capital that had increased to $1.8 trillion by the end of 2010—nearly four times more than they had in their portfolios at the end of 2003. Some of those assets were still valued either below cost or below the carry hurdle rate, particularly larger companies acquired at high multiples during the cyclical peak years of 2005 through 2007 that had yet to mature. But many assets were ripe for sale, having stabilized or improved their performance since the depths of the downturn.

It was a great time to sell. With valuations high, GPs who were eager to get “wins” under their belt before hitting the road to raise their next fund capitalized on the market opening. Virtually none of the large buyout funds from the vintage year of 2005 or later had yet returned capital paid in by their limited partners. Asset sales during the first half of 2011 enabled them to put cash into the hands of distribution-starved limited partners, who would need the liquidity to meet capital calls on previous fund commitments and to sign on for new funds.

Yet, as we pointed out in our analysis of the investment outlook, what started so promisingly in the first half of the year fizzled out amid recession fears, sovereign-debt woes and market volatility in the year’s second half (see figure). Activity retreated across all channels, and exit value dropped some 57 percent. Whether measured by deal count or deal value, total buyout-backed exits ended the year flat from full-year 2010 levels. Clearly the buoyant mood that greeted the start of the year had soured by year’s end. 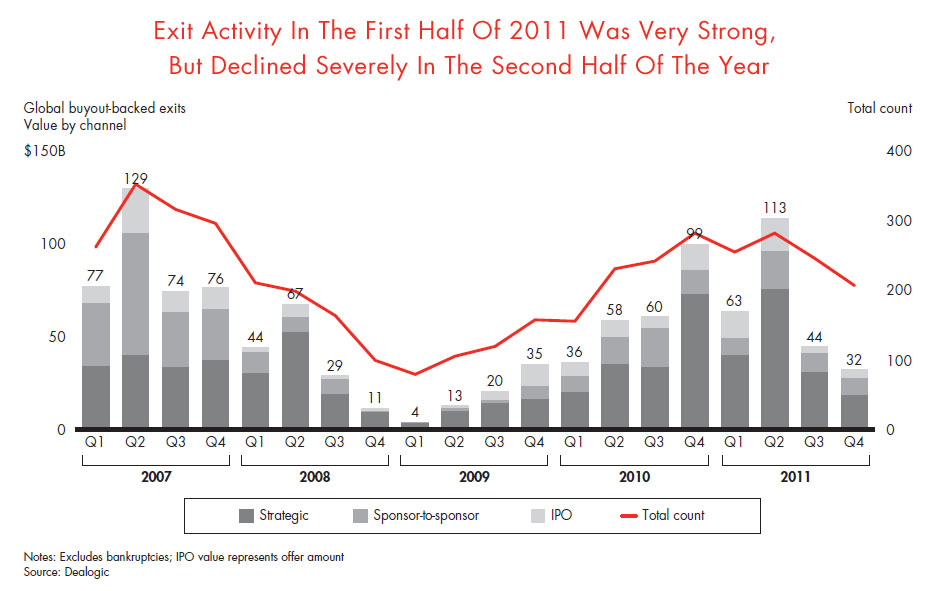 Exit opportunities remain nascent in emerging markets. Valuations cratered in 2011, making IPOs and sales to strategic buyers less attractive. Realizations from asset sales continued to trail the pace of new investments, as they have throughout the past decade. Although the slow pace of exits to date has raised skepticism about the attractiveness of emerging markets for PE investment, the simple fact is that a large proportion of the investments made to date simply has not yet had time to ripen for sale. PE investors have principally provided their target companies with infusions of growth capital, which require far longer holding periods than the buyout investments more typical of PE in developed markets. Because PE funds only began in earnest to pour capital into the developing economies since 2005, relatively few growth capital investments had sufficient time to reach a threshold size that made them attractive candidates for IPO or sale to strategic acquirers.

In our next post, we'll look at the long shadow that PE exits in 2011 cast over conditions PE funds faced going into 2012.

Private equity investments: A question of supply and demand

There is plenty of momentum to drive deal making forward in 2012.