Success at deal making is no small feat. Dozens of studies have indicated that 70 percent of major deals fail to create significant shareholder value. Yet it's extremely hard to build a world-class company and meet investors' expectations through organic growth alone.

It's a classic damned-if-you-do, damned-if-you-don't conundrum: Mergers go bad more often than not—but mergers are indispensable. So how does the forward-looking executive reconcile the low probability of deal success with the need to build acquisitions into a company's growth strategy?

The answer is, be disciplined in decision making, and focus on the critical decisions that make or break the deal:

Resolving those crucial deal issues is not a matter of following a step-by-step checklist or crunching the latest valuation formulas. In fact, focusing on technical razzle-dazzle or inch-by-inch integration techniques can actually distract deal makers from the big picture. Rather, decision-making success comes from practicing four key imperatives:

But one great deal rarely serves as a foundation for sustained shareholder value. To be consistently successful, you have to organize and institutionalize your M&A functions to create discipline around the four deal decisions.

Invest with a thesis

Successful acquirers begin with an investment thesis, a statement of how a particular deal will create value for the merged company. The most compelling investment thesis is one that explains why and how an acquisition stands to improve the existing core business.

When Bain surveyed 250 senior executives who had done major deals, 43 percent confessed that they'd failed to begin the M&A process by defining a strong investment thesis for their transaction.

Merger strategy is inseparable from business strategy. Before you can create an investment thesis, you need to understand the basis of competition in your industry—basically, how your businesses make money and how they compete. Most companies compete primarily on the basis of cost position, brand power, consumer loyalty, real asset advantage, or government protection. The best acquirers know their core strengths and target deals that enhance them.

What steps should you take to identify appropriate targets and define deals that make sense for your organization?

The message here: Do your homework, long before you approach acquisition candidates. Develop a sound investment thesis, based on a clear growth strategy and an understanding of your basis of competition. Then be prepared to act on that homework. Go after targets that you already know intimately. Go to the table frequently, but don't bite off more than you can chew.

Due diligence all too often becomes a "check-the-box" exercise, collecting reams of data but failing to tell executives what they need to know to decide whether to consummate the deal. The best deal makers zero in on the big questions—the ones that, once answered, will demonstrate whether or not there is a match between the target and the acquirer's investment thesis. What's critical in due diligence isn't how much you know; rather, it's determining what you don't know and should know, and then nailing down that information.

Unfortunately, that kind of disciplined due diligence is an exception. When Bain surveyed 250 executives involved in M&A, only 30 percent expressed satisfaction with the rigor of their due diligence process.

To determine which deals to close, build your due diligence process around three critical steps:

Throughout the due diligence process, test what you're learning against predetermined "walk-away" criteria—criteria that indicate the acquisition does not make sense. If any of those tests leads to irreconcilable doubt, the next step is obvious: Walk away from the deal.

Integrate quickly where it matters

Many companies take a very holistic, work-plan-centric view of integration. That approach is understandable—everyone wants to tackle problems in a comprehensive way—but it contains a major pitfall. The truth is, only a few integration activities really drive the success of a deal. If taking a broad-based approach makes acquirers take their eye off those few key activities, it can be a recipe for trouble.

While every integration—like every merger—is different, a number of guiding principles apply across almost all integration efforts. They all revolve around a central question: Where do operations really need to be integrated, and where can the merging businesses simply carry on separately? The answer lies in a set of four decision principles.

Plan for ownership. Ideally, acquirers should launch their integration planning months before the deal is publicly announced. Many of the toughest integration decisions will be about people. Management should link all decisions tightly to the deal's investment thesis and to the synergies and cultural issues identified during due diligence.

Integrate quickly in critical areas. Carefully target areas for integration based on the deal's investment thesis. Mergers aimed at creating economies of scale require nearly seamless integration. But mergers aimed at extending product, customer or geographic scope require only selective integration. Move quickly on the things that matter most.

Put culture high on your leadership agenda. Leaders of merged companies need to retool their corporate culture in a way that's consistent with the deal's investment thesis. Whatever integration plan you choose, you need to use hard tactics—organizational structure, compensation incentives and the division of decision-making authority—to address cultural integration.

Maintain firepower in the base businesses. Mergers can exert a gravitational pull on employees. Keep most of the talent focused on minding the store. Devise a plan to retain key employees and protect the customer base.

Effective integration generally ranks as the single most important factor influencing the success of a deal. It can make or break a deal's trajectory. Yes, integration is hard. But companies can vastly improve their odds of success by moving quickly only on the few things that really matter. And a sharpened focus will free the rest of the company's talent to concentrate on keeping the base businesses running smoothly.

No deal ever works out exactly as planned. The most effective acquirers expect things to go wrong—although even they can't say just where the train will go off the rails—and they ready themselves to correct course. They set up mechanisms for diagnosing and remedying problems. They're prepared to intervene early and decisively when the unexpected occurs.

Post-deal problems generally fall into one of three categories:

Deal success is not random. By bringing rigor to a handful of key decisions, over time, you will master the merger. And you will accomplish more than that. You will wield one of the most powerful corporate tools and gain control of your organization's fortunes. And that is the true promise and potential of mastering the merger. 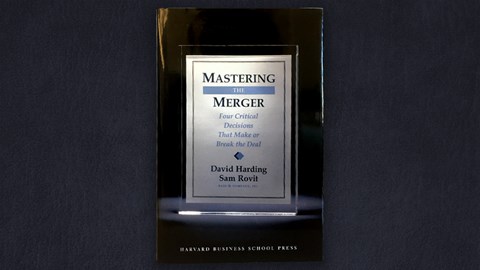 Four Critical Decisions That Make or Break the Deal