The decision in question was what should go on the roadmap of products slated for development by ECG, Intel's Embedded and Communications Group. The general manager and marketing director responsible for each of ECG's three product areas wanted a say. So did the unit's strategic-planning manager, who looked across all three areas—industrial, automotive and communications applications. Because of the confusion, said Davis, "We were making decisions without including the right people, so they didn't stick. Someone who hadn't been involved early on would bring a new piece of data, and we'd go back and revisit the decision."

Too many organizations struggle with their critical decisions. Some simply dither. Others make a decision and then, like ECG, revisit it. Still others make poor choices or cannot translate their decisions into action.

For decisions with a great deal of value at stake, the cost of all these failings can be extraordinarily high.

This article shows you how to attack your troubled decisions by resetting them—in effect, setting them up to succeed. A decision reset not only gets individual decisions working better, it also demonstrates to people in the organization that they can cut through bureaucratic logjams and get things decided and delivered.

Let's take a look at each one. Resets that bring you closer to best practice on all four will put you well along on the path to greater decision effectiveness.

Is the decision at hand clear in everyone's mind?

If not, the first step is to state the decision explicitly. Intel, for example, asks its employees to begin every meeting with a single statement: "The purpose of this meeting is to inform you about X, to discuss Y and to decide on Z," where Z is a specific, well-defined decision.

Sometimes framing the decision right is essential. When the team at Ford Motor Company was deliberating whether to accept a bailout from US taxpayers, for example, CEO Alan Mulally framed the decision as "What strategy will maximize the long-term value of the company?" This forced the group to examine alternatives such as "fix the operations," "merge with a competitor," "seek Chapter 11 bankruptcy protection" and others, along with accepting government funding. By framing the decision this way—and not "Should we accept a bailout or not?"—Ford was able to make the best decision for all the company's stakeholders.

Determine the who: RAPID®

Even if the decision itself is clear and well framed, individuals may be uncertain about their own roles and responsibilities. In helping our clients reset decisions, we use a time-tested tool known as RAPID to cut through the uncertainty and to clarify who's accountable for what. The words that form the acronym RAPID—Recommend, Agree, Input, Decide and Perform—reflect the primary roles in any decision, though we have taken liberties with the sequence to create a memorable acronym.

• Decide. Eventually, one person will decide. (Many RAPID users say that this person "has the D.") Giving the D to one individual ensures single-point accountability.

• Perform. The final role in the process involves the individual or group who will perform or execute the decision. It's this party's job to implement the decision promptly and effectively.

Spelling out decision roles was one key to resetting product-roadmap decisions at Intel's ECG. Doug Davis and his team gave the D to the strategic-planning manager within ECG, who was best placed to make trade-offs across the unit's product areas. They assigned an input role to the product managers. Implementation wasn't perfectly smooth. Some of the product general managers, for example, weren't happy with just offering input and would second-guess the strategic-planning manager's decisions. But Davis reinforced the new roles, and soon the decisions were going smoothly—and a lot more quickly. "We're not thrashing around on these things as much," he says.

Companies that are best at handling decisions use a consistent, well-defined process for every major decision, whether it is made in the C-suite or on the frontlines. They modify it only to take into account the value that is at stake— more care and attention for high-value decisions, less for lower-value ones. Like RAPID, a structured decision process has the great advantage that people eventually come to understand and expect it. If one person isn't following the drill, someone else is likely to raise a red flag.

The best practices, such as those listed in the figure below, are remarkably similar from one company to another. Any structured approach needs to incorporate the appropriate steps and sequencing. It needs to factor role assignments into the picture. ECG's process specifies how people will play their roles, at what stage they will provide input, when a recommendation will be developed, how approval will be sought when necessary and how the final decision will be reached. Communications is also a key part of ECG's decisions. Davis says, "We developed a regular cadence of 'Here's what we've done, here's why we've done it' to help people understand what's being added to the roadmap and why. This has reduced the amount of revisiting we do by a lot." 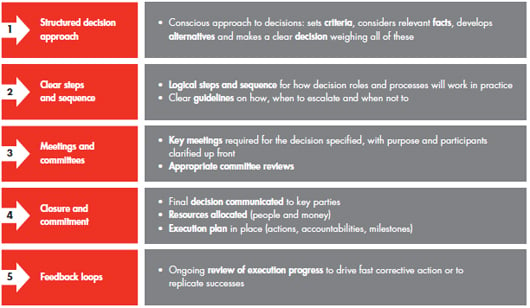 The best performers create schedules, timetables, milestones, deadlines. They ensure that decisions are quickly followed by action. Bob Walter, the CEO who led Cardinal Health from start-up to $100 billion in sales during his tenure, was a stickler for avoiding decision drift. He would say, "Delay is the worst form of denial." When an issue hit the executive agenda at Cardinal, the clock began ticking. Every team had a certain length of time to come back with facts, alternatives and recommendations. Every executive had a strict timetable for making a decision and seeing that it was carried out. Timetables ensure that decisions get made at the right speed and that execution stays on track.

In an earlier article we described the case of Hospira, a specialty pharmaceutical and medical device company that sought to increase its effectiveness on many critical decisions.3 Among the decisions that weren't working well at Hospira were everyday operational matters such as producing marketing materials. That particular process seemed to take forever. Often it didn't lead to effective sales aids. So a team attacked it in just the manner outlined here:

What. Everybody knew that the US Food and Drug Administration (FDA) had strict regulatory restrictions on what a pharma sales aid could say. But discussions with the team suggested that while the employees were rightly concerned with FDA guidelines, they didn't put enough emphasis on the benefits of the product. So Hospira agreed that the what of the decision was to develop effective, compelling brochures that were also FDA compliant. 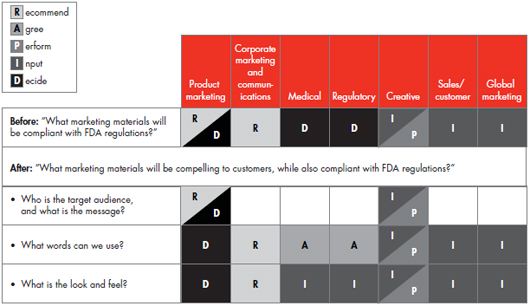 Like Intel and Hospira, you can reset your organization's key decisions and get them humming. The likely outcome? Better, faster decisions and improved performance—and a renewed sense of engagement and enthusiasm among the people involved. 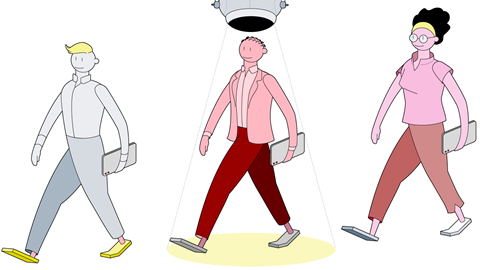