An excerpt from the first chapter, "An Organization's Productive Power—and How to Unleash It."

The common wisdom these days is that the business world is moving at lightning speed. That’s certainly true in some respects. Technologies of all sorts evolve rapidly. Brash upstarts disrupt long-established businesses. The litany of examples is familiar.

But when you spend time inside the steel-and-glass offices of most large corporations, an entirely different phenomenon strikes you. Forget lightning, internet time, and all the other metaphors of speed. Here, things move slowly. Meetings drag on. Emails pile up unanswered. Delays are endemic, decisions postponed. To be sure, people seem impossibly busy. They stare intently at their computer screens and tap purposefully on their keyboards. They take meeting after meeting and call after call, often grabbing a quick lunch at their desks. They spend long hours in collaboration with colleagues who may be half a world away, which can mean coming in early or staying late. But their output, the actual work they get done, is far less than it should be.

Economists would point to data indicating that overall productivity growth has declined appreciably since 2007 and, in some sectors, has barely kept pace with the rate of inflation. White-collar productivity is likely to be part of this sluggish trend, though we can’t say for sure because nobody compiles separate statistics on office workers. But you hardly need statistics to know that something is amiss in the corporate world. Ask any executive about his or her company’s workforce and you are likely to hear concerns like these:

Nor do the gripes come only from the top. Front-line employees and midlevel managers tell us that they are constantly frustrated—by their company’s procedures and rules, by the endless meetings and countless emails, by the layers of management that separate them from their unit’s ultimate boss and from the customer. “You can’t get anything done around here” is a common refrain. There seems to be an unbridgeable gap between what people at every level think they ought to be producing and what they are actually able to do.

The few existing data points support the image of organizations mired in the mud. According to recent studies by CEB, a research and advisory firm, the time and effort required to complete many critical business tasks grew significantly between 2010 and 2015. Hiring a new employee took sixty-three days in 2015, up from forty-two days just five years earlier. Delivering an office IT project took more than ten months, up from less than nine months in 2010. Entering into a B2B sales contract took 22 percent longer than it did five years earlier. And in many cases, it’s not just the amount of time that grew—the number of people required to complete these tasks increased as well.

The implications for the economy are immense. Estimates by management scholars Gary Hamel and Michele Zanini suggest that corporate bureaucracy costs the US economy more than $3 trillion each year. Deriving their data from US Bureau of Labor Statistics figures, Hamel and Zanini estimate there are 12.5 million surplus supervisors bogging down the economy and sapping workforce productivity. They further estimate that there may be as many as 8.9 million “paper-pushing subordinates” carrying out chores of dubious value on behalf of these superiors. Redirecting these 21.4 million people into value-creating work could, in Hamel and Zanini’s estimates, unleash $3 trillion or more in annual US GDP. Similar bureaucracy undermines the performance of the United Kingdom, Germany, and most other developed economies.

Today’s companies thus face a new kind of strategic threat. On the one hand, the external environment is speeding up. A fast-changing digital world presents exactly the right kind of environment for nimble upstarts to displace slow-moving incumbents. On the other hand, the metabolic rate of many incumbents is slowing down. A sluggish organization, one that can’t make quick decisions and take quick actions, leaves itself unusually vulnerable, at risk of being left in the dust, outpaced by leaner, fitter, and more innovative competitors.

So here’s the situation: talented people show up for work every day, but then something happens and they can’t get as much done as they believe they could or should. We think of that something as organizational drag, a collection of institutional factors that interfere with productivity yet somehow go unaddressed. Organizational drag slows things down, decreasing output and raising costs. Organizational drag saps energy and drains the human spirit. Organizational drag interferes with the most capable executive’s or employee’s efforts, encouraging a “What’s the use?” attitude. While the level varies, nearly every company we’ve studied loses a significant portion of its workforce’s productive capacity to drag. It’s time for companies to confront this productivity killer head on. 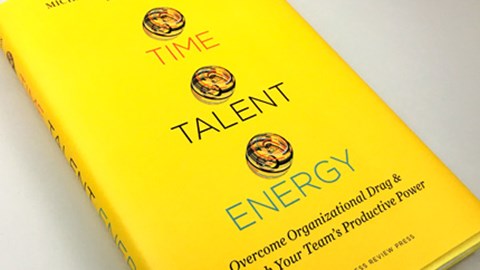