CHICAGO, JULY 20, 2020 – Today, leadership advisory firm Spencer Stuart and management consulting firm Bain & Company released Covid-19: Is Your Board Hitting the Brakes on CEO Succession?, a report that focuses on CEO transitions during a global economic crisis. This new research examines boardroom behavior and attitudes toward CEO succession, as well as implications for CEOs during times of economic uncertainty. The report finds that CEO transitions fall to their lowest levels the year after a recession hits its bottom, while the most active director decisions around succession— ousting CEOs for poor performance or scandal — decline even further during the same period. Although boards are reluctant to change leadership during times of crisis, postponing succession creates risks. It can deprive companies of both the leadership needed to navigate a turbulent landscape and the ability to identify and pursue opportunities to win coming out of the crisis.

“Now more than ever, it is critical that boards regularly update their succession plans if they hope to be nimble, efficient and successful in the wake of this crisis,” said Cathy Anterasian, Partner and co-leader of CEO Succession Services for Spencer Stuart in North America. “Per our analysis, we strongly encourage leaders to scenario plan in this moment to ensure that succession plans are up to date. Preparation and planning were key factors in preserving company health and performance during previous recessions.”

The report examines the patterns of leadership transition over the past three decades, using historical outcomes to offer guidance to boards navigating the impact of Covid-19. It finds evidence that boards are behaving now as they have in previous recessions by concentrating on near-term decisions and management stability. For example, in April and May of 2020, CEO transitions fell worldwide compared with the same months in 2019, including by one-third in Europe and Asia. Transitions have started to pick up again in June, particularly in Europe.

Additionally, the report reveals the important questions CEOs must ask and answer to chart a near-term and long-term course for the company and the need to align with their boards, which may not be as deeply knowledgeable about the changing fundamentals of the business or broader industry.

“For CEOs, all crises present a defining moment and Covid-19 is an extraordinary one,” said Courtney della Cava, Partner and member of Bain & Company’s Leadership and Talent practice. “The best CEOs discover opportunity in crisis – they look beyond the recession and retool their business for a different future.  For example, we already have seen many CEOs step back to not merely refresh their strategy, but more importantly to use the crisis to fundamentally transform their business. They’re leveraging key elements of the crisis, such as smart use of data to understand evolving customer needs, embracing digital acceleration, managing new ways of working, such as agile and remote working from home, and capitalizing on competitors’ weaknesses.”

In the past, leadership transitions declined most in industry sectors hardest hit in the recession. During and after the global financial crisis in 2007-2008, for instance, CEO transitions at US financial services companies dropped more dramatically than in prior crises; while US technology, media and telecommunications companies experienced a disproportionately larger drop during the Dotcom recession in the early 2000s than other crises. 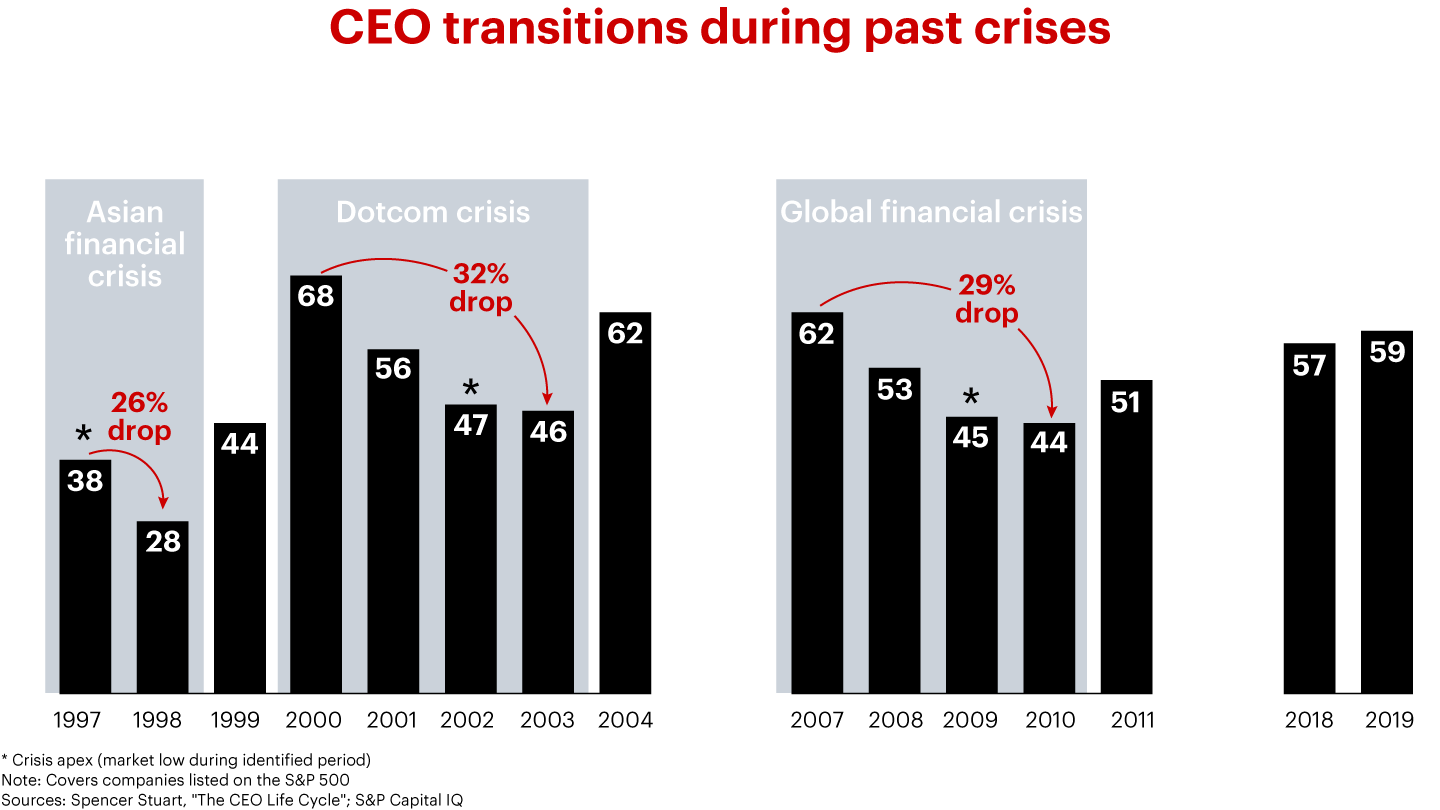 While the full effects of the recession caused by Covid-19 are yet to be seen and the pace of recovery is hard to predict, Spencer Stuart and Bain & Company also offer guidance to boards and CEOs on how best to manage the uncertainty. According to the report, instead of focusing merely on leadership continuity, boards should put planning for the following three CEO succession scenarios at the top of their to-do list:

According to the report, great CEOs strike a balance between collaborating with their boards to chart the right near- and long-term course for the company, while being under the board’s watchful eye. To successfully steer their companies through the crisis, CEOs should focus the following four areas:

The analysis is based on a data set of approximately 2,700 CEO transitions during recessionary periods from across the globe, covering the period from 1996 to June 2020. This was supplemented with broader secondary research acquired through news coverage and company websites. The data set covers companies listed on the S&P 500, FTSE 100, ASX 100 and other indexes across the UK, Germany, France, Spain, Switzerland, Netherlands, Hong Kong and South Korea.

At Spencer Stuart, we know how much leadership matters. We are trusted by organizations around the world to help them make the senior-level leadership decisions that have a lasting impact on their enterprises. Through our executive search, board and leadership advisory services, we help build and enhance high-performing teams for select clients ranging from major multinationals to emerging companies to non-profit institutions.

Privately held since 1956, we focus on delivering knowledge, insight and results through the collaborative efforts of a team of experts — now spanning more than 70 offices, over 30 countries and more than 50 practice specialties. Boards and leaders consistently turn to Spencer Stuart to help address their evolving leadership needs in areas such as senior-level executive search, board recruitment, board effectiveness, succession planning, in-depth senior management assessment, employee engagement and many other facets of culture and organizational effectiveness. For more information on Spencer Stuart, please visit www.spencerstuart.com.