This piece originally published in HBR.org.

Bain & Company recently launched a study that asked more than 1,000 men and women in a mix of U.S. companies two questions: “Do you aspire to top management within a large company?” and “Do you have the confidence you can reach top management?” Women with two years or less of work experience slightly led men in ambition. But for women who had more than two years on the job, aspiration and confidence plummeted 60% and nearly 50%, respectively. These declines came independent of marriage and motherhood status, and compared with much smaller changes for men, who experienced only a 10% dip in confidence.

Why the dashed expectations? To start, the majority of leaders celebrated in a corporate newsletter or an offsite meeting tend to consist of men hailed for pulling all-nighters or for networking their way through the golf course to land the big account. If corporate recognition and rewards focus on those behaviors, women feel less able, let alone motivated to try, to make it to the top.

One woman recounted her firm’s recent management retreat: “Watching middle-aged white male after middle-age white male tell their war stories of sacrificing everything to close the sale was demoralizing, I just kept sinking lower in my chair and thinking that I would never be able to make it to the senior ranks if this was what it took.”

This culture is reflected in the answers to a second set of questions: “Do you see yourself fitting into the typical stereotypes of success within the company?” and “Have your supervisors been supportive of your career aspirations?” New workers of both genders had similar responses to the questions. But more experienced workers answered very differently. Women’s confidence that they matched the corporate ideal dropped by 15 percentage points, men’s by just 9 points. Women’s sense that their supervisors supported than career goals was 20 points lower; men’s was just 3 points lower. (See the full article on HBR.org for figure.)

Some women told us their direct supervisors don’t know their career aspirations, or what to say or do to support them. Others reported feedback like “you’re not cut out for” top management, or “you don’t really want it.”

What’s not happening are discussions of goals, career strategies, job satisfaction, overall trajectory and—especially—the simple giving of real encouragement, all in a business culture that rarely celebrates women’s role models. While every insecure overachiever (the definition of strivers) needs encouragement, our research clearly demonstrates that, because of gender differences, men get it more frequently than women. One study by the Center for Talent Innovation even showed that two-thirds of male managers balk at counseling more-junior women; if the conversations don’t take place, the needed affirmation simply can’t happen.

That’s a huge missed opportunity, because positive affirmation creates huge benefits. Both men and women want to work for organizations that recognize talent in all its varieties, polls show. Having engaged employees assures better business outcomes and more loyal customers.

Orit Gadiesh is the chairman of Bain & Company in Boston. Julie Coffman is a partner with Bain & Company and chair of Bain’s Global Women’s Leadership Council. 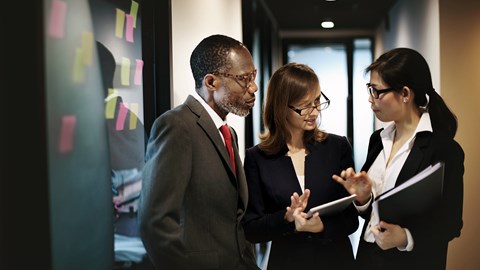