Strong market conditions, and perhaps a backlog of delayed exits due to the gyrations caused by Covid-19, made for a record level of private equity-backed healthcare exits in 2021. Whether through sale of a portfolio company to another sponsor or a strategic corporate buyer, or an initial public offering, or some other means, exits globally increased to 244 in 2021 from 146 in 2020. Disclosed deal value, meanwhile, surged to $179.3 billion from $73 billion. Corporate acquirers were especially active, in line with the prior year, so that sponsor-to-sponsor exits made up a smaller share of transactions (see Figure 1).

Exit activity has transformed over the past three years, particularly in the Asia-Pacific region, provider sector, and for corporate acquirers

Sponsor-backed exits grew in every region. North America continues to account for the majority of exits globally, though its share dropped from 58% in 2020 to 53% in 2021. North American deal volume rose from 84 exits to 129 exits in 2021, with most of the growth resulting from sponsor-to-strategic exits, doubling from 27 deals in 2020 to 54 in 2021 (see Figure 2).

Asia-Pacific was the fastest-growing region, with 33 deals in 2021, up from 16. This was driven almost exclusively by sponsor-to-strategic exits, from 6 in 2020 to 22 in 2021. Asia-Pacific private equity markets clearly are coming on strong.

Europe also saw significant growth, increasing from 42 exits to 77 in 2021, here again spurred by sponsor-to-strategic exits, which grew from 23 to 45.

The largest exit was the electronic health record vendor Athenahealth, acquired by Bain Capital and Hellman & Friedman from Veritas Capital and Evergreen Coast Capital for $17 billion. Veritas and Evergreen took Athenahealth private in 2019 in a deal valued at $5.7 billion, implying a hefty return within a holding period of less than three years.

With a raft of large deals, biopharma had a banner year for exits. Deal count rose to 60 in 2021, up from 42 in 2020, and disclosed value more than tripled, to $56 billion from $17.3 billion. Three biopharma deals exceeded $5 billion each, 2 of which were pharma services assets that yielded strong returns.

PPD, a clinical research organization that Thermo Fisher purchased from Carlyle and Hellman & Friedman for $17.4 billion (excluding debt), was the largest biopharma exit of the year. H&F and Carlyle made large returns through a long holding period; both firms invested in PPD’s 2011 take-private and again in a 2017 recapitalization, and now they’ll receive a 5.5-fold and 3-fold return, respectively, on their investments. For Thermo Fisher, the acquisition advances its drug development capabilities and value proposition.

The second-largest biopharma exit was the sponsor-to-sponsor trade of Parexel from Pamplona Capital to EQT and Goldman Sachs for $8.5 billion.

Medtech: a surge in surgical devices

Sponsor-to-corporate exits in medtech more than doubled from the previous year to 11 trades. The largest was Bain Capital’s purchase of PartsSource from Great Hill Partners.

Many more exits and one huge deal distinguished the life sciences tools and diagnostics sector in 2021. Deal volume more than doubled from 7 in 2020 to 16, while disclosed deal value multiplied more than eight times, from $4.7 billion to $39.1 billion. The rise in value occurred largely because of the special-purpose acquisition company (SPAC) Gingko Bioworks, a synthetic biology company that builds organisms for customers in nutrition and health; it merged with Soaring Eagle Acquisition Group and went public at a $15 billion valuation, providing an exit for a consortium of investors. With so much capital at a steep valuation, Gingko Bioworks has a tough task to meet shareholder expectations.

The second-largest life sciences exit was Danaher’s purchase of Aldeveron, a manufacturer of plasmid and other reagents for the life sciences industry, from EQT for $9.6 billion. The deal will expand Danaher’s development capabilities and help it bring products to market faster.

Payer exit transactions declined from 15 in 2020 to 8 in 2021. Disclosed deal value rose sharply from $15.3 billion to $31.9 billion, but this stemmed mostly from UnitedHealth’s Optum agreeing to acquire Change Healthcare for $13 billion, an exit strategy for Blackstone, which owned 20%.

As in 2020, many of the large assets that exited are focused on payer technology and data. This includes the Change Healthcare platform, which manages revenue, payment, and clinical data. With the deal scheduled to close in 2022, the new entity will combine that platform with Optum’s data analytics to create more informed insights from claims data.

Looking at initial public offerings (IPOs) of payers, the largest was Signify Health, a tech-enabled value-based care platform, which went public with a valuation of more than $5.3 billion, an exit for New Mountain Capital, followed by the $200 million IPO of Convey Health Solutions, an IT infrastructure company for payers, providing an exit for TPG.

The second-largest payer exit was the acquisition of DentaQuest, a dental insurance provider, by Canadian insurer Sun Life for $2.5 billion from Centerbridge. The deal strengthens Sun Life in dental benefits and US employee benefits.

The median holding period for healthcare assets held steady at 4.5 years in 2021, but the first quartile of deals shortened slightly, possibly indicating that opportunistic investors are selling into a strong market (see Figure 3).

High valuations and large pools of capital waiting to be put to work continue to foster a favorable exit environment for private equity sponsors. Many sponsors selling inside a two-year holding period sensed a window to seize rising valuations and ample strategic exit channels, even if that occurred early in the investment horizon. The few notable quick flips, or assets held for less than two years, include both corporate and sponsor-to-sponsor opportunities, such as EQT’s exit of Aldeveron to Danaher and Atlantic Street Capital’s exit of United Veterinary Care to Nordic Capital.

Sales to SPACs, an exit strategy that flourished in 2020, continued in 2021 through large transactions such as ATI Physical Therapy, an owner-operator of therapy clinics and an exit opportunity for Advent International.

During 2021, the number of healthcare-related SPAC IPOs grew 100%, lagging the broader SPAC market, which rose 150%, and also lagging their growth in 2020.

There are still almost 80 healthcare-related SPACs searching for targets, with about half expiring by the first quarter of 2023 (see Figure 4). However, given increasing regulatory scrutiny around SPACs and competitive intensity from corporates and sponsors, some of these SPACs could struggle to find a deal before their expiration.

Outlook: strong investor demand, though IPOs and SPACs may taper

In the next few years, we expect many large assets will come to market due to continual roll-up activity, especially in diagnostics, specialty providers, and pharma and medtech services. Competition for assets is bound to increase as sponsors and corporate investors look to broaden their portfolios, especially in the life sciences, biopharma, and provider sectors.

On the heels of the successful exit of Carlyle and H&F from PPD, where a long holding period and continued investment produced a great return for both sponsors, we may see other firms double down in their investments and hold assets for longer periods.

However, if regulation tightens and the competition for SPAC targets increases further, we expect a number of healthcare SPACs to fail to make a transaction, which could impact this exit vehicle's opportunities in 2022 and beyond. Moreover, while IPOs were up this year, they were the exit strategy with the slowest growth. Combined with the fact that many expensive healthcare assets that went public in 2021 continue to trade below par value, this may dampen the attractiveness of exiting via public markets in the future. 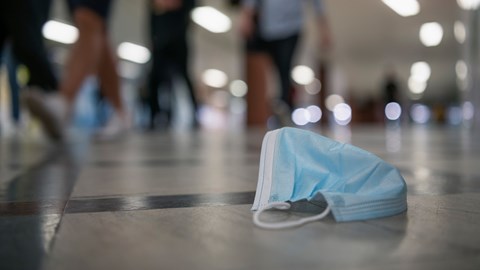 Healthcare companies are responding to changes wrought by the coronavirus and gearing up to anticipate future outbreaks.