Business executives could learn a lot from cheetahs, Earth’s most agile land animals. Though their ancestors ran only about 20 miles per hour, today’s cats can accelerate from zero to 60 within three seconds—faster than a Corvette Twin Turbo or a Ferrari Enzo. But speed alone is not what makes cheetahs such awesome hunters. Computer models show that the best predictor of a successful hunt is not a cheetah’s top speed; rather, it’s how fast it stops and turns.

There is an important parallel to the executive hunt for innovations. Whether they are developing new products, processes, or overhauling old ways of doing business, it’s not enough that organizations pursue new ideas faster. Unless they develop new muscles for skillfully decelerating and adapting to unexpected twists and turns, they are likely to come up empty-handed. It’s one of the most common laments of executives struggling to increase their organization’s adaptability: “We are terrible at stopping work, even when it’s obvious that the work is a complete waste of time and money.” This is as true for existing business lines and processes that live on budget season after budget season zombie-like as it is for a once-bright new idea that simply isn’t panning out.

The cost of this problem is higher than managers imagine. Gary Hamel and Michele Zanini estimate the cost of bureaucratic waste has hit $10 trillion and is growing. Between 70% and 90% of innovations fail, and healthy operations grow weaker every day that they must subsidize foundering projects kept alive by political inertia rather than potential payoff. When power is determined by the amount of resources controlled, as it so often is in business, admitting failure and surrendering resources is rare.

Since stopping things is so very hard, executives make starting them even harder, dampening innovation. They raise investment hurdle rates, demand more detailed analyses, and add layers of scrutiny. Sadly, these actions don’t improve decisions so much as damage speed to market and competitive positioning. Failures mount. Eventually, the horde of failing projects grows too large to ignore. Managers cull some large percentage of their people, traumatize the organization, and launch the doom loop all over again.

There is another way. Organizations can evolve and by focusing on three specific things, they can improve their own agility and start stopping things faster.

While researching our book Doing Agile Right: Transformation Without Chaos, we learned from former Amazon executive Jason Goldberger that in order to accelerate innovation, founder Jeff Bezos purposefully encourages executives to make decisions reversible, which ensures that a company won’t have to live with bad consequences for very long. It thwarts risk aversion and accelerates experimentation.

Unfortunately, not many companies run this way. Far too many investment proposals plan for premature and irreversible scaling. They call for large upfront investments, and predict delayed, hockey-stick-shaped revenues and profits. When revenue and profit fail to materialize, it seems too late to stop. The payoff must be just around the corner. “Why, we would be crazy to stop now,” executives tell themselves. And so, throwing good money after bad drags on.

One way to break this habit is to run the business the way a savvy venture capitalist invests. Recognize business plans for what they really are: business experiments. Break large, risky gambles into a series of smaller, smarter tests. Clarify the hypotheses, the best ways to test them, and the metrics that will signal whether to persist, pivot, or pause. Avoid premature scaling—hiring too many people, building too much capacity, doing too much marketing—before key assumptions have been validated. Match costs to revenues. Start by confining experiments to affordable, adaptable, and reversible microcosms of the ultimate solution by limiting geographies, customer segments, or product lines. (You can read more on how to experiment effectively, in this HBR article by Stefan Thomke and Jim Manzi.)

Look at DoorDash, the door-to-door delivery company. Recently DoorDash has ridden a Covid-19 surge in demand, but back in 2013, when it began raising what would eventually become a total of $2.5 billion, venture capitalists didn’t just back up a Brink’s truck of money to the startup. The risks were too high, and such a move would have limited investors’ ability to spur strategic change when necessary. Instead, venture capitalists phased in their investment over 11 rounds of funding.

In the 2016 round, when questions about the viability of its strategy reportedly led to its shares selling at a lower price than earlier rounds, the company made important changes. DoorDash added new services for restaurants and adjusted pay for drivers. Market share increased, as have subsequent valuations.

DoorDash is still not profitable, and its ultimate success is far from guaranteed. But its venture backers have clear and frequent opportunities to change how they invest and influence company direction. Investors can decelerate, pivot, and stop.

It’s hard to improve or stop unproductive work if you can’t see what work is being done and how well it’s going. Too many companies are flying blind.

Executives can inspect physical facilities and assess whether to refurbish or bulldoze them. They can see inventories piling up and decide whether to finish them or write them off. The intangible work of most technology, marketing, and other departments, however, is often invisible to leadership teams.

Increasing visibility is good for everyone. It helps senior executives uncover valuable initiatives, recognize the people pushing them, and accelerate their progress. It allows employees to see projects related to their own jobs, learn from them, and identify where their expertise could solve perplexing problems or save time and money. It makes it easier for everyone to identify duplicative work and triggers discussions about whether overlapping teams should collaborate or compete. It helps teams working on interdependent steps coordinate and minimize delays.

Imagine a system that enables authorized employees to see all work streams, who is on each team, what else they are working on, and how the work is progressing. Imagine tagging the work of each team with descriptors such as strategic priority, targeted customers, expected economic value, and progress against plans. Perhaps employees could even express how confident they are in each team’s success. These systems actually exist—project and portfolio management software, objectives and key results trackers, talent management systems, and workforce analytics—and they are getting better.

They say the first rule of daredevil airplane wing-walking is: “Don’t let go of what you’ve got until you get hold of something better.” Astute leaders realize that fearful workers will cling to the current work no matter how unproductive. They do several things to overcome that fear. One we’ve already discussed:  They reduce the cost of stopping projects (e.g., by conducting experiments).

Another way is to reward people who learn valuable lessons by taking prudent risks, even if the immediate outcome was disappointing. In some cases, this may mean keeping the bold objective but adapting the approach as conditions or capabilities change. When Bezos wanted to enable third-party sellers to sell new or used products on Amazon, the company initially failed: The 1999 launches of Amazon Auctions and zShops both fizzled. But Amazon Marketplace, launched soon after, was a success. It now accounts for more than half of all units sold by the company.

Finally, giving people more opportunities if their current project fails reduces the likelihood that they’ll stick with a bad idea longer than they should. Successful companies build a strong and visible backlog of compelling opportunities. They make it clear that until existing projects that aren’t panning out have stopped, new initiatives can’t be launched. And they redeploy people from the former to the latter as a matter of policy and offer training to ease the transition. In time, the fear of missing out on something better starts to overpower the fear of loss.

In a world of increasingly unpredictable change—where opportunities are constantly zigging and zagging like spry gazelles—running at higher speeds is not enough. Businesses must evolve to match their acceleration muscle with faster stopping and turning skills. As they do, their hunt for growth will grow more fruitful, their competitive capabilities will strengthen, and their position in the food chain will climb. 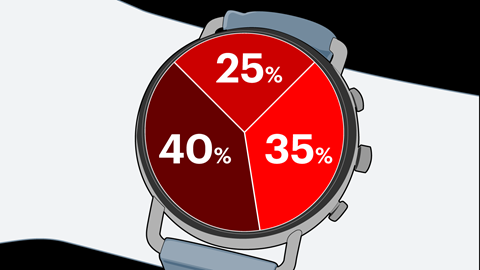 A Day in the Life of an Agile CEO

To build and operate an Agile enterprise, executives shift their focus from operations to strategy and talent.

Develop Agility That Outlasts the Pandemic

Three tips to avoid going back to your old bureaucratic ways.