The banking industry is primed for heated merger and acquisition (M&A) activity globally — including in ­Asean, according to Bain & Co.

“We expect active M&A flow in Asean banking,” the consulting firm’s Singapore-based partner Chew Seow-Chien tells The Edge in an interview. Chew leads Bain’s financial services practice in Southeast Asia and is an expert in the firm’s digital practice.

The main Asean markets she sees M&A activity playing out in are Indonesia, Vietnam and the Philippines.

One of the key reasons banks will be seeking M&A is to build positions of scale, Chew says.

“Scale is more important than ever as banks seek to manage margin compression caused by a host of pressures, including competition from non-traditional players, rising compliance costs, larger capital expenditure requirements for digital or technology investments and so on,” she explains.

“Asean banking markets continue to be very attractive. [Both] Asean banks and banks from outside of the region are pursuing acquisitions to accelerate their growth in the region,” Chew notes.

One of the trends she has observed is banks buying competitors to build scale in markets where they are smaller. For example, in January, Singapore’s UOB Group announced its acquisition of Citibank’s consumer banking businesses in Malaysia, Thailand, Indonesia and Vietnam for US$3.6 billion (RM15.07 billion).

UOB Group paid a US$690 million premium for the acquisition as the deal would help to double its customer base in these markets.

There have also been more cross-border transactions across Asean — for example, the acquisition of Bank Permata in Indonesia in May 2020 by Bangkok Bank, one of Thailand’s leading banks — and cases of non-Asean players like Japanese and Korean banks venturing into the region.

South Korea’s largest retail bank KB Kookmin Bank, in particular, has been actively making acquisitions. Last October, it acquired a 30% stake in Cambodian microfinance firm Prasac Microfinance Institution, giving it full control of the latter after having taken a 70% stake for US$603 million in April 2020. Kookmin Bank also took an additional 45% stake in Indonesia’s Bank Bukopin in August 2020.

Apart from “traditional” M&As, Chew expects to see significant growth in strategic partnerships — in the form of joint ventures (JVs) and alliances — between banks and non-banks across all Asean markets.

“Banks are leveraging JVs and strategic alliances as a way to gain access to new capabilities or new customers,” she says, citing as an example Standard Chartered Bank’s JV with National Trades Union Congress of Singapore (NTUC) last September to set up a digital-only bank.

NTUC owns the largest supermarket chain in Singapore as well as a top insurance company and businesses in healthcare, childcare and property management. The JV will embed Standard Chartered banking in NTUC’s ecosystem, Chew notes.

“We will see M&A and partnerships develop in all markets in Asean, [but] one of the markets that is getting the most interest is Indonesia. It saw a lot of deal activity in 2021 and we expect continued interest in 2022. Other than Indonesia, the Philippines and Vietnam are some of the other markets where we expect to see strong M&A activity,” she states.

Indonesia still has a large number of banks, many of which are sub-scale, Chew points out. “As the Indonesian regulator had raised core capital requirements from IDR2 trillion to IDR3 trillion, smaller banks with insufficient capital will need to consolidate to meet the requirements. Indonesia has strong underlying fundamentals, so, many global and regional banks are looking to grow their business in the market. Acquiring a local bank is a key step towards gaining a local banking licence.” 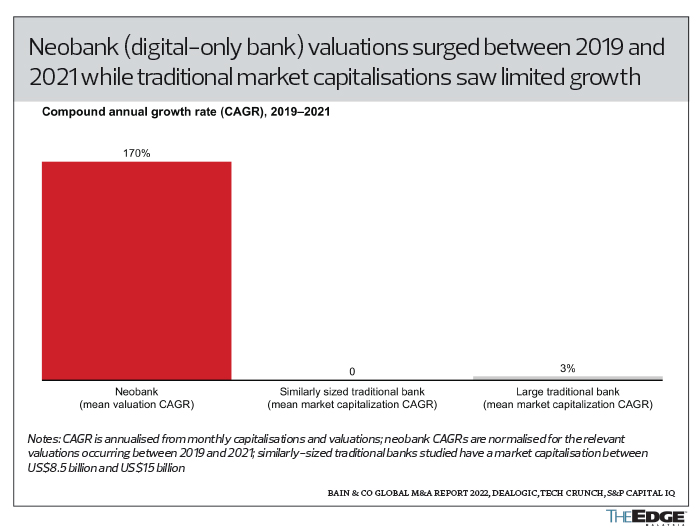 "These players can use funds raised to acquire banks, often as a means to gain a banking licence. As they pivot towards becoming a digital bank post-deal, this allows them to sustain and increase their valuation,” she remarks.

In Malaysia, where there are currently eight local banking groups and several standalone Islamic banks, there has not been a single M&A among lenders in almost five years. The last was in November 2017, when non-bank lender Malaysia Building Society Bhd agreed to acquire Asian Finance Bank Bhd for RM645 million in a cash-and-share deal to clinch the latter’s banking licence.

And, while there has recently been market speculation about mid-sized lenders AMMB Holdings Bhd and RHB Bank Bhd potentially re-attempting a merger, it remains to be seen if it will come to fruition. Neither party’s shareholders have officially made a move. They had explored a merger in mid-2017 but abandoned the plan after not being able to reach mutually acceptable terms and conditions.

However, the emergence of new digital banking players soon may prod banks out of their M&A slumber. Bank Negara Malaysia received 29 applications for digital banking licences last year — many of which were made up of consortiums — and will announce up to five successful recipients later this month.

“Given the quality of consortia partners vying for the new licences, we can expect the eventual licence winners to be formidable players with big investment budgets and who can tap the customer ecosystems of their parent shareholders,” Chew says.

According to Bain’s global research, the operating cost per customer at incumbent banks can be as high as three to seven times that of digital banks.

“Additionally, our research also shows that customer advocacy of incumbent banks in Malaysia, measured by Net Promoter Score in 2022, is moderate to low — suggesting that customers are likely to switch banks if a better offer comes along,” Chew says.

In contrast, digital banks will make customer experience their top priority. “New digital banks will have the benefit of being able to build new customer propositions and experiences without being encumbered by legacy processes and systems. Incumbent banks will have to look hard to redefine their business and operating models to deliver compelling value and better experience to customers in order to compete effectively with the new players,” she points out.

As such, M&A to gain scale efficiencies could be one lever for incumbent banks to achieve better cost economics, Chew says.

“Incumbent banks will also need to accelerate their digital transformations to compete in this new world. Strategic partnerships with non-banks and fintechs to access new capabilities and new customer ecosystems will also be high on the agenda for incumbent banks,” she adds.

In its fourth annual global M&A report released last month, Bain notes that, for banks, M&A has become a particularly important lever for growth — it could account for 50% of revenue growth in the years ahead, an increase from the already-high 35% rate.

“While an average of 75% of [M&A] activity from 2015 to 2020 has involved scale deals, there will be a rise in scope deals as banks face a growing need to broaden their reach,” it says. In its global survey of M&A executives, 72% of financial services respondents expect their company’s M&A activity to increase over the next year.